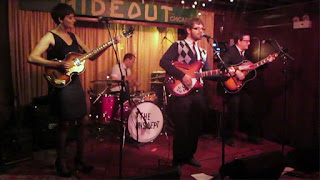 International Pop Overthrow rolls into the work week after kicking off its 2017 visit to Chicago with what appears to have been a successful weekend. Tonight’s five-band showcase at the Red Line Tap brings the fun and catchy England-to-America transplants The Unswept back for a performance at 10:15 p.m. If the band is selling any of its CDs, be sure to pick one up. Sam Vicari opens the show at 8:00 p.m., followed by Leisure McCorkle. Packy Lundholm performs at 9:30 p.m., and Reaction, a band that formed in the 1980s and recently reunited, is tonight’s headliner.

Tomorrow brings Cabin Essence, Mark Watson, Christopher Joseph Elam, and Blind Trust to the stage. Young Distractions, a trio that claims The Replacements, Husker Du, and The Ramones as influences, are tomorrow’s closer. On Wednesday, IPO vet and globe-trotting rock star Dave Rave performs, along with The Romeros frontman Mike Vanderbilt with his The Suburban Garage Sound. Collectors, another trustworthy IPO outfit, plays at 9:30 p.m., and the Tony Calderisi Band opens at 8:00 p.m. See the official International Pop Overthrow website for the full Chicago schedule through next Saturday night, along with links to most of the performers involved.
Posted by Terry Flamm at 8:20 PM