Tommy And The Rockets - Beer And Fun and Rock ’n’ Roll 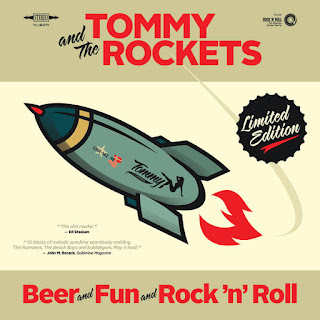 Danish singer-guitarist Thomas Stubgaard evokes an American style sock hop on Beer And Fun And Rock ’n’ Roll, his first release under the name Tommy And The Rockets. Like his heroes The Ramones, Stubgaard infuses nostalgia with punk energy, along with a nod toward power pop masters Paul Collins, Rockpile, and Fountains Of Wayne. He supplies his own spirited “Ooh la la” and “Sha la la la la la” backing vocals, while Yank musicians Brad Marino and Kris “Fingers” Rodgers from The New Trocaderos support him on drums and keyboards, respectively.

Co-written with New Trocaderos producer/composer Michael Chaney, Stubgaard songs like “Time To Rock” and “Mommy’s Little Girl” focus on the exhilaration of dating and partying. “What Am I S’pose To Do” and the frantic “You Want Me (But I Don’t Want You)” deal with the darker aspects of relationships, while the catchy “Silly Teenage Love” depicts a guy contemplating the love that might have grown from a relationship he scuttled years earlier by being unfaithful.

“Take My Advice,” with backing vocals by Bente Helgeneseth, is a twisted look at twin sisters who are polar opposites of each other. The aptly named title track and “Here Comes Summer,” which evokes The Beach Boys with its celebration of bikinis, the ocean, and driving a Woodie car, are both loads of fun. All in all, this international collaboration turned out to be a smashing success.
Posted by Terry Flamm at 9:58 PM