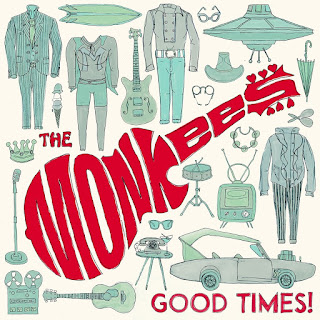 If you’re a fan of Little Steven’s Underground Garage syndicated radio show, an avid Mojo magazine reader, or in any way celebrate the connection between mid-1960s pop and current alternative rock, then Good Times! is likely to strike a chord with you. The concept of having modern rock stars compose songs for a new Monkees album is an inspired one. Working with material from XTC’s Andy Partridge; Death Cab For Cutie’s Benjamin Gibbard; Weezer’s Rivers Cuomo; and Noel Gallagher (Oasis) with Paul Weller (The Jam, Style Council), the three remaining Monkees deliver a lively and well-crafted album.

Fountains Of Wayne frontman Adam Schlesinger produced the album, played various instruments, and wrote one of the better tracks. Good Times! includes a 1967 Neil Diamond song featuring Davy Jones, and a previously unreleased Harry Nilsson effort from 1968. These tracks, along with one from 1968 by Carole King and Gerry Goffin, were re-recorded this year with added vocals.

Micky Dolenz, who does most of the lead vocals on Good Times!, breezes through the lilting “You Bring The Summer,” capturing Partridge’s signature wry imagery. Cuomo’s catchy “She Makes Me Laugh” is lighter and silly, as Dolenz sings of playing Scrabble with his girlfriend while they wear pink party hats. “I Was There (And I’m Told I Had A Good Time),” co-written by Schlesinger and Dolenz is a basic but fun rock tune that reminds me of the Chicago-based band The Handcuffs’ “Everybody Waves Hello.”

Lest anyone think the fare here is too lightweight, Dolenz and Michael Nesmith share lead vocals on Gibbard's mysterious and intricately woven “Me And Magdalena.” “Birth Of An Accidental Hipster,” co-written by Gallagher and Weller, is a psychedelic jewel featuring Nesmith on lead vocals and an arrangement that drifts through various tempo changes. Peter Tork nails the rebellious mood of King and Goffin’s folk tune “Wasn’t Born To Follow.”

The re-recorded “Love To Love” allows Dolenz and Tork to harmonize with Jones, and Dolenz joins his old pal Nilsson on the garage rock of “Good Times!” Schlesinger’s catchy “Our Own World” has Dolenz, Tork, and Nesmith singing on it, and there’s a guitar-driven instrumental break. “Whatever’s Right,” a peppy new tune from Tommy Boyce and Bobby Hart, evokes images of dancers bopping around on one of those 1960s variety shows, and brings back fond memories of the days when this songwriting duo gave The Monkees some of their biggest hits.
Posted by Terry Flamm at 10:56 PM