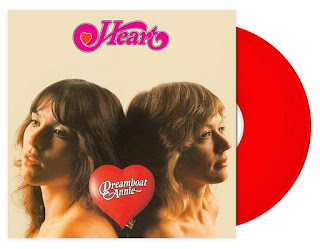 Heart’s red vinyl 40th Anniversary version of its debut LP Dreamboat Annie went on sale today. It doesn’t have any bonus tracks, but I’m hoping to pick up a copy at Reckless Records while I’m downtown for the Gold Coast Art Fair, which is being held in Millennium Park tomorrow and Sunday.

Material Reissue, featuring original Material Issue members bassist Ted Ansani and drummer Mike Zelenko with singer-guitarist Phil Angotti in place of the late Jim Ellison, are sharing a double bill with Green tonight at Wire in Berwyn. Zelenko and Angotti were guests on Richard Milne’s Local Anesthetic last Sunday on WXRT. If you missed the program, you can still catch it on the Local Anesthetic website.

The Tickets went on sale today for legendary punk pioneers The Buzzcocks’ September 22 show at The Vic, and new buzz band Catfish And The Bottlemen’s October 12 gig at The Riviera Theatre.

Jay Goeppner and his band Backdated will be performing at the Taste Of Des Plaines street festival tomorrow night at 7:00 PM.

Whitewolfsonicpricness, whose new Shadow Of The Marigold is an ethereal, sometimes troubling but always engaging album, will be featured on WXRT’s Local Anesthetic this Sunday night. Host Richard Milne will also play tracks by Fort Frances, Studebaker John and The Hawks, Steve Leaf and the Ex Pats and Pat McKillen and Outburst on the 66.

Hard Rock Cafe is presenting The Underground Garage Concert Series on Friday nights this summer at Yankee Stadium in New York. The schedule includes WYLDLIFE next Friday; The Grip Weeds on August 5; Palmyra Delran and The Dopple Gang on August 26; and The Weeklings on September 9. Little Steven, please bring some of these shows to the Chicago area.

Taste Of Randolph, one of the higher class summer festivals in the Chicago area, is running this weekend with a band list that includes Peter Bjorn and John; The Record Company, and Save The Clocktower. I realize I’m hyping WXRT a lot this week, but the station is sponsoring a lineup of local bands on a stage that will replicate the Red Rocks Amphitheater outdoor concert venue in Denver. Those in attendance will have a chance to win a trip to Red Rocks.

I was sad to read in this past Wednesday’s Chicago Tribune that former Wings guitarist Henry McCullough has passed away at age 72. I saw the soft-spoken but interesting McCullough being interviewed at Fest For Beatles Fans - Chicago a few years back, and his anecdote about playing the guitar solo on Paul McCartney’s “My Love” was fascinating and funny.

The Mary-Arrchie Theatre has come up with an eye-catching t-shirt for its very last Abbie Hoffman Died For Our Sins festival, which runs August 19–21 at The Den Theatre. The hippie skull design is available in blue, pink, grey, or green, and can be purchased through the theatre’s Booster funding page.

Comedian/magician and now screenwriter Penn Jillette and director Adam Rifkin will be at The Gene Siskel Film Center on July 7 for the Chicago premiere of their new comedy Director’s Cut. The film also stars Herbert Blount and Missi Pyle.

Mighty Con Dupage Comic Con takes place next Saturday and Sunday at the DuPage County Fair Grounds in Wheaton. The event promises over “100 vendors, artists, creators, and guests.” A day pass costs $8, a weekend pass is $12, and kids under 12 are admitted free.

If you’re in downtown Chicago, check out the massive and really cool mural of Muddy Waters on a building at the intersection of Madison and State.
Posted by Terry Flamm at 11:34 PM