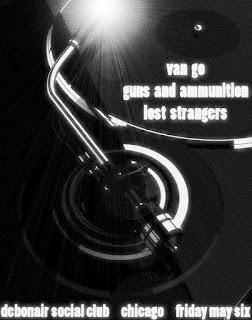 Van Go has been absent from the Chicago club scene for a while and there was some concern that it might never come back. I’m happy to report you can catch the band this very night at Debonair Social Club at 1575 N. Milwaukee Avenue. Led by vocalist Davey Sippel, Van Go, a veteran of International Pop Overthrow - Chicago, places sarcastic observations within guitar-driven power pop arrangements on songs like “Your Three Minutes Are Up” and “Invisible Girlfriends.” They also capture the spirit of Elvis Costello while covering his song “Girls Talk.” Tonight’s show is scheduled to start at 8:00 PM.

In other welcome Chicago music scene news, Material Reissue will join forces with Green for a gig on June 17 at Wire in Berwyn. Material Reissue played a sold-out International Pop Overthrow - Chicago gig a few years back, with original Material Issue members bassist Ted Ansani and drummer Mike Zelenko joined by singer-guitarist Phil Angotti in place of the late Jim Ellison. They performed the entire power pop masterpiece International Pop Overthrow (the festival took its name from the album) and sounded great. Green, led by vocalist-guitarist Jeff Lescher, created power pop gems like “She’s Heaven,” “Hear Me,” “Hot Lava Love,” and “Long Distance Telephone.” Both of these bands started in the 1990s, and remain legends to this day.
Posted by Terry Flamm at 7:41 PM