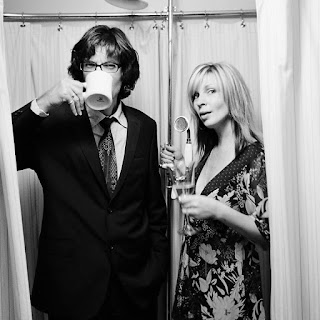 Here’s to their first music festival. Detweiler and Bergquist from Over The Rhine.

The critically acclaimed, Cincinnati-based alt rock/Americana band Over The Rhine is hosting and performing at Nowhere Else, its first music and arts festival, this weekend. Band Of Sweethearts, The Blind Boys Of Alabama, Lucy Wainwright Roche, and The Bluegrass All-Stars will also be performing at a barn owned by Over The Rhine founding members Karin Bergquist and Linford Detweiler.

The Zombies, led by original members vocalist Colin Blunstone and keyboards player-vocalist Rod Argent, will be performing this Sunday night at The Arcada in St. Charles. In addition to hits like “Time Of The Season,” “Tell Her No,” and “She’s Not There,” it’s likely The Zombies will play songs from their latest effort Still Got That Hunger.

Tap House Grill, at 56 W. Wilson Street in Palatine, usually doesn't book live bands but it will have one for its Summer Kick-Off Party this Sunday night. The Messengers take the stage at 9:00 PM and there will be specially priced drinks, wings, and fries.

The Joliet Public Library’s 7th Annual Star Wars Day will be held from 11:00 AM to 4:00 PM on June 4 at the library and Joliet Area Historical Museum. The event will offer prizes; games; lots of adults and kids in Star Wars costumes; music; artists; exhibitors; and movie props. Admission is free.

The Bad Examples are celebrating the 25th Anniversary of their debut Bad Is Beautiful with a PledgeMusic campaign. The new deluxe edition on 180 gram vinyl with a gatefold cover is available for pre-order for $30 and comes with a download card. An autographed version can be purchased for $40, and other premiums are available

Peter Asher, Louise Harrison, Joey Molland, Klaus Voormann, Mark Hudson, Mark Rivera, Billy J. Kramer, and Albert Lee will be this year’s guests at Fest For Beatles Fans - Chicago on the weekend of August 12 through 14 at the Hyatt Regency O’Hare. The Beatles tribute album Liverpool and the The Weeklings will perform, and WXRT DJ Terri Hemmert will once again serves as the Fest’s MC. The official Fest For Beatles Fans site promises more guests will be announced soon.

Longtime Chicago music scene favorites Kevin Lee and Cliff Johnson share a double bill on June 2 at Fitz’s Spare Keys in Elmhurst. And the cover charge is only $5.00. See my May 24 post for more info on this show.

Chicago area band Buzz Orchard will be back with its original lineup, including lead vocalist Davey Sippel (who also was a member of Van Go) for the first time in years when it performs on June 4 at the Gallery Cabaret.

I thought I had read that The Posies’ new album Solid States would only be sold at their secretive live performances, but I see that it’s now available on Amazon.

A few weeks back, I mentioned here that Chicago independent publisher Curbside Splendor would open a record and book store within a major new venue called Revival Food Hall at some point this summer. A recent post on the Curbside Splendor Facebook page said the store will open at 125 S. Clark Street in July. Looking forward to it.

Numerous bluegrass, country, and roots music artists will be on hand when The Hideout presents its annual Day In The Country event on Sunday June 12. The Lawrence Peters Outfit, Lady Parts (Kelly Hogan and Nora O’Connor), Coyote Riot, Oakstreet Ramblers, Gin Palace Jesters, and Girls Of The West among the scheduled performers.

Guests won’t need to don tuxedos or fancy gowns when the Movers And Shakers Company presents Santah’s Prom-A-Llama-Boom-Boom on Friday, June 11 at 1st Ward at Chop Shop. In addition to the band Santah, The Kickback, Archie Powell and The Exports, The Congregation, and Glam Camp will be performing at this adults-only prom.
Posted by Terry Flamm at 11:02 PM