The Jangle Band - Edge Of A Dream 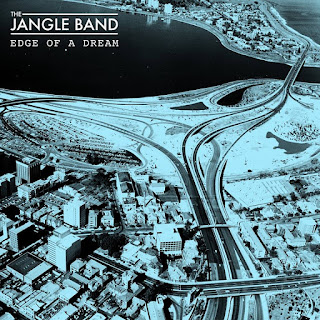 Australian musician Joe Algeri continues his prolific recording output with this full-length debut from The Jangle Band. Unlike his previous efforts as The JAC, this isn’t a solo album where he plays most of the instruments and does all the vocals. Ian Freeman is the lead vocalist for this group, and in addition to Algeri, guitarist Jeff Baker, bassist Dave Wallace, and drummer Mark “Sid” Eaton all sing. Their combined voices often give Edge Of A Dream those Byrds-like harmonies Algeri has always favored.

That said, the album opens with “282,” a song that evokes The Kinks with its droll lyrics and music hall arrangement. The slower and more ornate “Let Me Breathe” also taps into the earliest days of the British Invasion, and like the autobiographical “Perth,” it’s built on an appealing mix of acoustic and electric instruments. The jangling guitars this band takes its name from are front and center on “This Soul Is Not For Sale,” which was previously released as a two-song single with “Kill The Lovers.” “Another Light,” “Love You Too,” and the title track should also sound like a dream come true for fans of The Byrds and 1960s style pop.
Posted by Terry Flamm at 8:39 PM