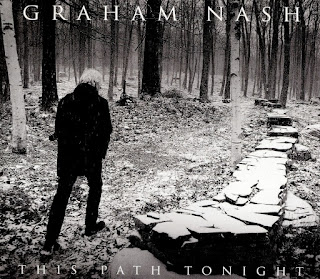 Graham Nash’s first solo album in several years finds him in classic singer-songwriter mode; crafting engaging melodies while striking a familiar balance between exploring romantic relationships and exposing society’s ills. Writing with veteran musician Shane Fontayne, he delves into symbolism more than he has in the past. Nash is still willing to raise his voice in protest, but that’s more evident on the three bonus tracks that come with the digital download. There’s also a theme of reflecting on the past and determining your future running through This Path Tonight.

When Nash describes the youthful excitement of playing in a rock band in “Golden Days,” he could mean The Hollies or his work with David Crosby and Stephen Stills. It’s similar to the autobiographical title track Hollies drummer Bobby Elliott wrote for that band’s 2009 album “Then, Now, Always.” The layered vocals and nautical theme of “Beneath The Waves” would have worked well on a CSN album, while “Target” offers the homespun beauty of early Nash efforts like “Simple Man” and “Sleep Song.”

This Path Tonight closes with “Encore,” a poetic and haunting ballad with references to “the last song,” “the last show,” and “the lights are all fading.” It may sound like Nash is considering his own farewell to music, but elsewhere—particularly through the rugged imagery of “Fire Down Below” and the title track—he’s eager to keep fighting. And on “Another Broken Heart,” he urges a woman who’s given up on being loved to, “find a future that you want to see.” In some ways, Nash is still giving us songs for beginners.
Posted by Terry Flamm at 10:36 PM