The Chemistry Set - The Endless More And More 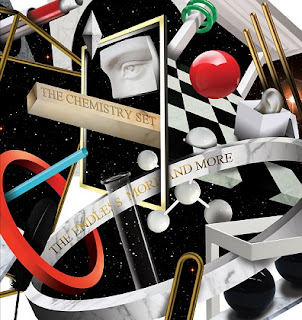 The Chemistry Set has been a major player in England's psychedelic revival since forming in 1987, and has also forged a special partnership with the vinyl-only, indie label Fruits de Mer. The Endless More And More is the first effort from the Manchester-based band in a few years, and an unmistakable sense of accomplishment can be felt in the triumphant horn intro on the opening track "The Splendour Of The Universe." The limited edition (600 copies) LP will be released on gold vinyl by FdM in early January. A quick glance at the song titles might evoke thoughts of ponderous prog rock, but The Chemistry Set brings a sense of adventure, energy, and amusement to the proceedings.

"International Rescue" opens with a guitar riff that could have come from a Revolver era Beatles song, and also includes "bop bop" backup vocals. The high-energy "Come Kiss Me Vibrate And Smile" runs with that intriguing offer and throws in some philosophical observations as well. "A Cure For The Inflicted Afflicted" has a hard rock edge, while on "The Fountains Of Neptune," The Chemistry Set aggressively mixes guitars and synthesizers for a prog rock gem.

"Time To Breathe" and "Winter Sun" are less engaging prog rock songs, but "Albert Hoffman," a freewheeling tribute to the inventor of LSD, is an eccentric masterpiece reminiscent of Syd Barrett. The light romance of "The Canyon Of The Crescent Moon" has an irresistible melody, and "The Open Window" offers enlightenment via an exotic arrangement built on sitar, synthesizer, and tablas.