Halloween Song: Motobunny - "My Boyfriend Is A Ghost" 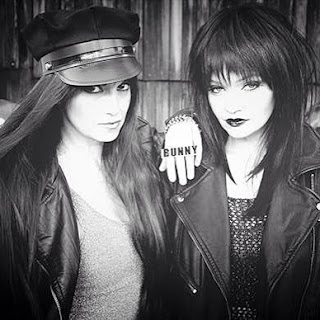 They ain't afraid of no ghost. Photo from the Motobunny Facebook page.

Back in October of 2009, I devoted the entire month to rock and roll Halloween songs. You can check out all 31 of them in the BHT archives, and I've added an occasional new one in the years since then. Here's the first spooky song of 2015.

Motobunny, a new band comprised of members from the veteran garage rock acts The Woolly Bandits and The Love Me Nots, released its rollicking self-titled debut last May. For the most part, Motobunny comes from the Ike and Tina Turner "We never, ever do anything nice and easy" school of rock, but the eerie "My Boyfriend Is A Ghost" gets off to a slow, ominous start. Vocalists Christa Collins and Nicole Laurenne seductively spin the tale of a woman whose deceased lover is still looking for some nocturnal action.

"I know he's under the bed even with my eyes closed tight," the woman explains, and later adds, "My hair is standing on end." The ghost also likes to look in her window, whisper sweet nothings, and stroll across the roof. As the song continues, bassist-vocalist Rik Collins, guitarist Michael Johnny Walker, and drummer Jay Lien provide a steady, hard-hitting beat, and Laurenne adds some haunting, B-52s style keyboards. Although some definitely creepy things are going in this after-life libido situation, "My Boyfriend Is A Ghost," along with Motobunny's "Apocalypse Twist" and "Spider And Fly" qualifies as a Halloween party song.