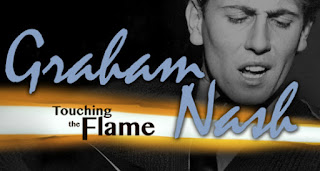 Sing along with a Simple Man. One of the numerous interesting things going on at the Rock And Roll Hall Of Fame's soon to open exhibit Graham Nash - Touching The Flame will be an opportunity to harmonize with the twice-inducted singer-songwriter. Nash will critique each guest vocalist's effort. That sounds like a dream come true for those who can actually sing, but I would be devastated by the sight of Nash holding his ears while I struggled through "Marrakesh Express."
On the more serious side, Touching The Flame hopes to illustrate how rock music has "shaped the world and inspired some of history's most powerful leaders." Nash will serve as narrator and display a number of artifacts from his collection, including test pressings of "Love Me Do,' "Please Please Me," and "Fool On The Hill" by The Beatles; the lyrics from "Most Likely You Go Your Way (And I'll Go Mine)," handwritten by Bob Dylan; Phil Everly's acoustic guitar; and a Joni Mitchell painting of Nash with their cat Calico.

A quote from Nash on the RRHOF website explains what he's hoping to achieve with the exhibit. "What I would like you to get out of this exhibit, is to know, no matter who you are, if you want to open your heart to express yourself, do it energy, do it with passion." He'll be at the Hall on Friday, October 16 to celebrate the exhibit's opening with a special performance and a book signing for his autobiography Wild Tales - A Rock And Roll Life.

Sports and music fans in Chicago have plenty to cheer about these days. The Cubs made it to the playoffs for the first time since 2008 (although they lost their first game against the St. Louis Cardinals tonight) and two of the city's best-known bands have been nominated for induction into the Rock And Roll Hall Of Fame. Cheap Trick and Chicago, along with The Cars, Janet Jackson, Deep Purple, The Smiths, Chaka Khan; Los Lobos, Chic, Steve Miller, Nine Inch Nails, N.W.A., The Spinners, Yes, and The J.B.'s, are in contention for being inducted in 2016. I'm rooting for Cheap Trick, followed by The Cars, and The Smiths. Fans can vote for the nominees on the The Rock And Roll Hall Of Fame website.

Mooner is having a release party for its new Masterpiece album tonight at The Hideout. Frontman Lee Ketch was recent guest on WXRT's Local Anesthetic with Richard Milne last Sunday night. Mama, Indonesian Junk, and Bobby Conn and Monica Boubou are also on the bill.

Pat DiNizio's 60th Birthday Bash takes place tomorrow night (October 10) at the Italian American Hall in Scotch Plains, NJ.  Suzanne Vega, who recorded a duet with DiNizio on the song "In A Lonely Place,"will one of the performers, along with The Smithereens, Marshall Crenshaw, Garland Jeffreys, Southside Johnny, The Grip Weeds, and members of The Hooters. DiNizio will also perform with his Beatles tribute band The Scotchplainsmen. The event is also a fundraiser to help pay medical expenses for DiNizio's upcoming surgery on his arm and hand.

Tickets went on sale today for Dandy Warhols at Thalia Hall on November 19, Eric Burdon And The Animals at City Winery on November 29, and The Cure at the UIC Pavilion on June 10, 2016.

Patti Smith will be at the Lund Auditorium at Dominican University in River Forest Sunday night to discuss her upcoming book M Train. Unfortunately for fans who don't already have tickets, the event, sponsored by The Book Table store in Oak Park, has sold out.

A Colbert connection. I once worked with a guy at a Mom and Pop record store on Chicago's southwest side who found the band name Was (Not Was) so mind-boggling that he forbade me from every mentioning it again. People like him might want to avoid the new musical comedy The Story Of A Story (The Untold Story) being staged by the Underscore Theatre Company. Fans of The Colbert Report, on the other hand, might flock to it. The Story Of A Story was created by Peter Gwinn, who snagged an Emmy Award for his writing work on The Colbert Report, and Jody Shelton, composer of the erotic fantasy 50 Shades! The Musical. Tickets for the show, which runs through November 8 at The Chopin Theatre (1543 W. Division), start at $10.

There are still a few weeks left to check out the work of Pattie Boyd, Henry Diltz, and Carinthia West at the Visions Of A Magic Time - Iconic Photos of the 60s and 70s exhibit. It runs through October 30 at the Hilton / Asmus Foto gallery on Wells Street in Chicago.

The Animation Show Of Shows, a 95-minute compilation for animated shorts from around the globe, will run October 11 through 22 at the Gene Siskel Film Center. Extraordinary Tales, a collection of animated Edgar Allen Poe stories, runs from October 23 through 29 for those looking for some more Halloween-oriented animation.

North By North has a gig on October 15 at the CMJ Music Marathon Show in Brooklyn. The Chicago techno trio's "Pistoletta"/"Dark Star" single is available for download on its Bandcamp page.
Posted by Terry Flamm at 11:30 PM