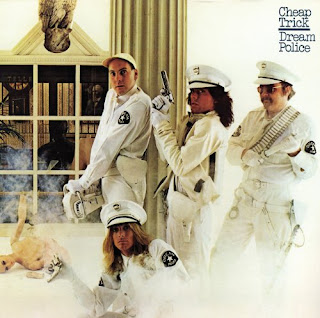 Any doubts I might have had as to whether "Dream Police" qualifies as a spooky song evaporated when Little Steven Van Zandt played it on the annual Underground Garage Halloween special. Van Zandt has always championed Cheap Trick on his syndicated radio program, and although I haven't  heard him specifically say it, I'm assuming he supports their induction into the Rock And Roll Hall Of Fame. As for "Dream Police," this comic bit of nocturnal hysteria was the title track of their fourth LP and a Top 40 hit in 1979.

Lead vocalist Robin Zander effectively conveys the dismay of a guy convinced his subconscious is being monitored by mysterious authority figures every time he falls sleep. "They're driving me insane/These men inside my brain," Zander sings, and notes that these cops never take a vacation. Probably because they're having too much fun tormenting him. The lyrics, as well as the irresistible melody were composed by lead guitarist Rick Nielsen, who also adds a manic spoken word segment to "Dream Police." His unique presence (as well as Cheap Trick's pretty boy/geek dynamic) is always best appreciated in live performances, but it's also evident in the song's rock video.

Speaking of live performances, Cheap Trick can be heard in a vintage concert this Sunday night on WXRT in Chicago at 8:00 PM Central Time. After listening to an hour's worth of evidence for why these guys belong in the Rock And Roll Hall Of Fame, you'll be ready to go to the Hall's website and vote for them. They need your help because they're currently in seventh place, and only five of the nominees will be inducted. Now that's scary.
Posted by Terry Flamm at 10:12 PM