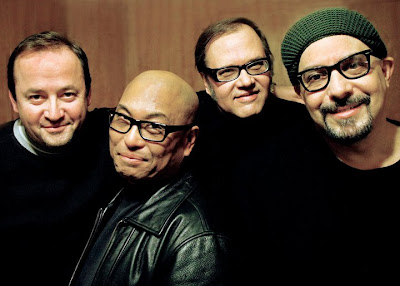 Another holiday rerun from years past. Hope everyone had fun last night and returned home safely.

There was a time when just about everybody thought of Guy Lombardo when it came to “Auld Lang Syne.” Lombardi and his Royal Canadians used to play it every New Year’s Eve on the radio and TV. Nowadays, probably nobody under 30 even knows who he is, although his version is available on iTunes. Somehow, it sounds particularly melancholy

“Auld Lang Syne” continues to be covered by various musicians. The version by The Smithereens on their catchy and festive Christmas With The Smithereens opens with the band harmonizing like a barbershop quartet before the guitars and drums kick in. From there, this emotional chestnut morphs into a pulsating surf rock tune that’s predominantly instrumental.

Smithereens drummer Dennis Diken also tackled the song with his side project Husky Team. This inventive instrumental take, which can be found on the Hi-Fi Christmas Party Volume 2 CD as well as on the Husky Team CD, Christmas In Memphis, mixes “Auld Lang Syne” with the Booker T & The MG’s 1960s hit, “Green Onions.”

“Auld Lang Syne” was also covered by a New Jersey band called The Cucumbers and can be found on the Ho Ho Ho Spice CD. The guitar-driven, slightly Celtic, power pop arrangement and Deena Shoskkes’s spirited vocals cast out any trace of sadness and offer instead an exhilarating sense of triumph. The journey’s over; the quest has been successful; we’ve won.

2011 was another challenging year. We’ve somehow survived it, but hope better circumstances lie ahead. It will take hard work, people putting aside fears and prejudices, and doing a much better job of finding solutions together.