2011 Memories - Bangles At The House Of Blues 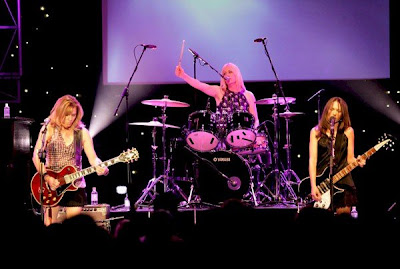 Another concert highlight from 2011. The Bangles came to The House Of Blues in Chicago to support their first CD in a number of years, Sweetheart Of The Sun. Having Vintage Trouble, a band that performs old school R&B as the opening act was an unusual choice, but judging from the audience’s reaction, it worked.

The Bangles didn’t hesitate to promote their most recent CD, Sweetheart Of The Sun at their House Of Blues concert in Chicago. In fact, they kicked things off with “Anna Lee (Sweetheart Of The Sun).” The melodic song was greeted warmly, although there was a much more emphatic roar of approval for “Hazy Shade Of Winter,” which followed directly after it. Still, The Bangles’ faith in their new material was merited, as several Sweetheart songs were expertly woven throughout a 90-minute career retrospective.

“In case you didn’t get the memo, we have a new recording out,” Vicki Peterson joked while introducing the stubbornly romantic “I’ll Never Be Through With You.” Debbi Peterson sang lead on her own rollicking “Ball N Chain,” and the majestic “Mesmerized” proved to be another newly minted highlight.

The performance included all the big hits, with “Manic Monday” coming fairly early on, but this was also an evening for those of us who were avid followers long before “Eternal Flame” topped the charts. Just as the show started, a version of the Bee Gees’ “In My Own Time” done by fellow Paisley Underground members The Three O’Clock blared over the sound system.