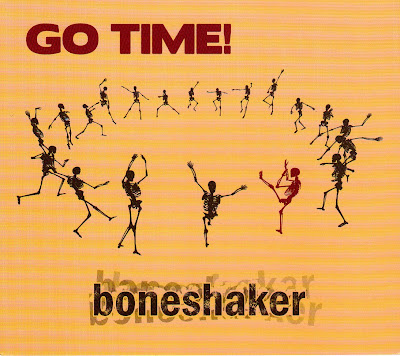 No one is ever gonna come away from a Go Time! album wondering what a guitar sounds like. As on its previous two efforts, the Chicago-based quartet features the instrument up front on a series of melodic songs. It’s still a challenge trying to slap a label on Go Time! due to the variety of approaches taken on Boneshaker, but that doesn’t make the CD any less enjoyable.

The more jazz-oriented “Terminally Askew” is the only track where Scott Niekelski and Paul Schmidt’s guitars are understated, and “Better Days” is mostly acoustic. Otherwise, their axes reign, from the hard rock of the expansive “Don’t Hold Back” to the R.E.M. influenced jangle of “April Fool.” “Residue,” a song about fading memories, and “Reluctant Hero,” a satiric look at the role men play in society, also stand out on this eclectic collection.