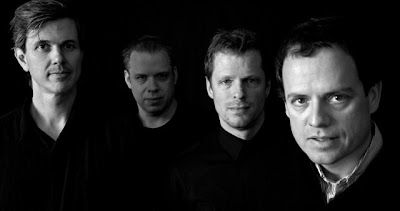 As odd as it may seem, there’s something reassuring about the way Dot Dash approaches punk rock. At a time when the genre has been watered down, commercialized, and co-opted by boy bands, this Washington, DC-based quartet plays the real thing. Not necessarily super fast punk, but the 14 energetic tracks on Dot Dash’s full-length debut, Spark Flame Ember Ash evoke UK bands like The Clash, The Jam, and The Smiths.

Singer-guitarist Terry Banks is a major reason for the similarity. His instantly appealing vocals sound British as he delivers well-crafted lyrics about the ups and downs of relationships. He and fellow guitarist Bill Crandall bring an intensity to melodic songs like “Tragedy/Destiny,” and a touch of 1960s jangle to the otherwise cutting edge “I’m Going Home.” The more whimsical “Alright, Alright” exudes the same charm as The Kooks, as well as their obvious role models, The Kinks.

While Dot Dash has only been together for a little over a year, its individual members have a lot of experience. Banks and bassist Hunter Bennett performed with the band Julie Ocean; Crandall logged time with Modest Proposal; and drummer Danny Ingram came from Swervedriver. Together they create a vintage punk sound on Spark Flame Ember Ash that’s hard to resist.