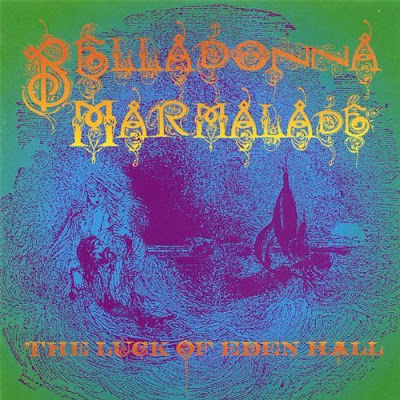 In the meantime, here’s a look at how it all started for The Luck Of Eden Hall. I wrote this review of their debut CD, Belladonna Marmalade for the Illinois Entertainer in 1993.

When Luck Of Eden Hall vocalist Gregory Curvey sings, “You can take a trip with me” on “Take A Trip,” it’s an invitation to join him in a whole new dimension. Listeners are transformed to miniature size and frolic among berries, walnuts, and dandelions while being serenaded by crickets and honeybees. As the day-glo graphics for Belladonna Marmalade suggest, this Chicago-based band has a lot of psychedelic influences.

“Darling Dear” gets the album off to a hard-hitting start before evolving into a more ornate arrangement. The title track travels a similar route and flows into the captivating maritime yarn, “Siren.” On the guitar-driven “Lilywhite,” a man strolling down a path spies maidens bathing in a stream and decides to join them. “Reel To Reel,” which sets fanciful imagery to a steady beat, is a prime example of The Luck Of Eden Hall’s potent blend of magic and muscle.