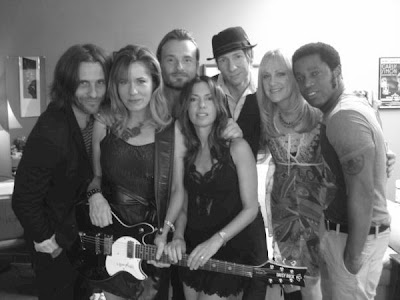 The Bangles didn’t hesitate to promote their most recent CD, Sweetheart Of The Sun at their House Of Blues concert in Chicago last night. In fact, they kicked things off with “Anna Lee (Sweetheart Of The Sun).” The melodic song was greeted warmly, although there was a much more emphatic roar of approval for “Hazy Shade Of Winter,” which followed directly after it. Still, The Bangles’ faith in their new material was merited, as several Sweetheart songs were expertly woven throughout a 90-minute career retrospective. Susanna Hoffs, Debbi Peterson, and Vicki Peterson, backed by keyboards player Greg “Harpo” Hilfman and bassist Derrick Anderson, were at the top of their game, offering gorgeous three part harmonies and energetic playing.

“In case you didn’t get the memo, we have a new recording out,” Vicki Peterson joked while introducing the stubbornly romantic “I’ll Never Be Through With You.” The rollicking “Ball N Chain” and majestic “Mesmerized” were other newly minted highlights. The Bangles also tapped into their 2003 reunion effort, Doll Revolution for “The Rain Song” and “Ride The Ride,” but surprisingly, their cover of Elvis Costello’s acerbic “Tear Off Your Own Head” was not offered.

The performance included all the big hits, with “Manic Monday” coming fairly early on, but this was also an evening for those of us who were avid followers long before “Eternal Flame” topped the charts. Just as the show was about to start, a version of the Bee Gees’ “In My Own Time” done by fellow Paisley Underground members The Three O’Clock blared over the sound system.

The set list reached back to the 1984 album All Over The Place for gems like “Restless,” “Going Down To Liverpool,” “Live,” and “He’s Got A Secret.” “Get The Girl,” from the Austin Powers flick The Spy Who Shagged Me, was given an extended intro, and briefly slipped into “Outside Chance,” an obscure song by The Turtles. The Bangles served up a rousing finale by meshing “In Your Room” from Everything with the much earlier “Hero Takes A Fall.”

The Bangles’ first encore was their cover of “Sweet And Tender Romance” from Sweetheart, which must have had a few audience members scratching their heads. The choice proved yet again that The Bangles are playing by their own rules theses days rather than bowing to any big record company demands. Imagine the indignation of the corporate types if they had seen Susanna Hoffs, Debbi Peterson, and Vicki Peterson come out and strut their stuff as go-go dancers for an opening act. That’s precisely what the trio did last night at The House Of Blues.

Making its first visit to Chicago, the smartly-attired Vintage Trouble seemed like an odd choice to open for the power pop oriented Bangles. But lead vocalist Ty Taylor is a charismatic showman in the old school style of James Brown, and the band’s energetic mix of R&B and hard rock was irresistible. The song that enticed The Bangles to join Vintage Trouble on stage was a barn-burner in the style of “Land Of A Thousand Dances.” Other highlights from these impressive newcomers included “Nobody Told Me” and “Blues Hand Me Down.”

Later, as The Bangles launched into their final encore, they invited the boys from Vintage Trouble to join them for a rollicking version of “Walk Like An Egyptian.” It was a perfect close to a concert that had seemed like a party all night.