The Severed Limb Reaches Out Again 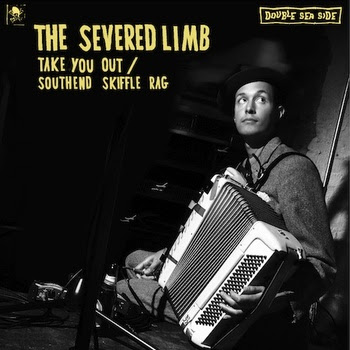 About a year ago, a gentleman from London named John contacted me about reviewing an EP by The Severed Limb. They were a skiffle band he had recently signed to the indie label he runs as part of his online store Lost Johns. After checking out the clever and highly infectious songs on the band’s MySpace page, I was more than happy to give their wonderfully titled five-song EP Woo Eee Ha Ha! a thumbs up. Back then, I praised The Severed Limb’s stripped down arrangements and energetic harmonies.

Last week, John sent me another gmail, this time regarding The Severed Limb’s new Double Sea Side single, “Take You Out”/“Southend Skiffle Rag.” Like its predecessor, this latest release is available online as well as in vinyl format. The melodic first track kicks off with a chiming guitar and shuffling beat intro before singer-guitarist Robert (band members go by first name only) offers a seemingly romantic invitation to join him for a stroll through town and by the sea. But there’s an underlying melancholy to “Take You Out” in the way this guy’s returning to favorite places that for some reason he hasn’t been able to visit for quite a while.

The much shorter “Southend Skiffle Rag” is an appealing instrumental that mixes old time acoustic blues with a tropical ambience, using guitars, old fashioned percussion, and harmonica. I can easily imagine people dancing to this, although it wouldn’t be a current dance style.

John also provided a link to the official BBC site, where some live studio performances by The Severed Limb are available for viewing. Not bad for a skiffle band that started out playing on the streets of London.