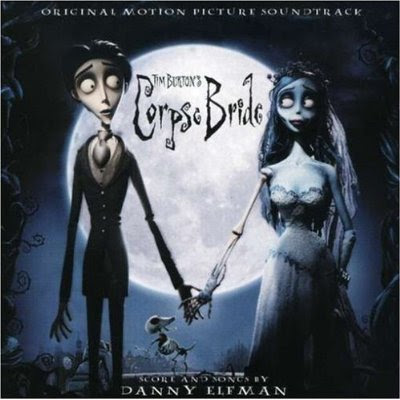 How about kicking off the haunting month of October with a review I did of Danny Elfman’s Corpse Bride soundtrack for the Illinois Entertainer in 2005?

Speaking of the Illinois Entertainer, the October issue is out, with lots of suggestions for Halloween fun. Plus, there’s an entire trick or treat bag’s worth of items that I wrote, including reviews of new CDs by The Bangles, Ivy, The Kooks, Matthew Sweet, and The Wandas.

Composer Danny Elfman knows the drill when it comes to crafting the creepy elegance needed for a Tim Burton soundtrack. Still, it’s hard not to compare Corpse Bride unfavorably with Burton and the former Oingo Boingo frontman’s collaboration on The Nightmare Before Christmas. Bride lacks a standout track along the lines of “This Is Halloween” or “What’s This?” and mostly features lush and moody instrumental pieces.

“Victor’s Piano Solo” and “The Piano Duet” have an intricate beauty, while other tracks are variations on the “Main Titles.” “Remains Of The Day” offers fun in a Tom Waits vein, but the lyrics, which strain to describe how the title character met her fate, could use more of the rapid-fire cleverness Elfman has shown in the past. “The Wedding Song” fares best, thanks to an ambitious arrangement and the Gilbert & Sullivan style vocals delivered by a host of underworld denizens. Corpse Bride ends on a festive note via four bluesy instrumental bonus tracks credited to Bonejangles & His Bone Boys.