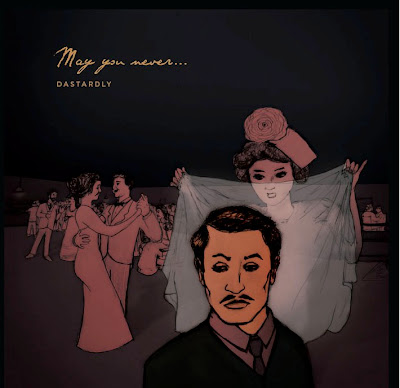 The Bangles have a show tonight at The House Of Blues in Chicago. Should be interesting to see how many songs they’ll play from the new Sweetheart Of The Sun CD. I’m betting on at least the title track and their cover of the Nazz nugget “Open My Eyes.” Hopefully even more.

Here are three reviews that originally appeared in the Around Hears column in the Illinois Entertainer.

The six-piece band Dastardly combines foot-stompin’ Country & Western instrumentation and elaborate vocal arrangements on their May You Never . . . EP, only to subvert them with reckless tempo changes and bizarre lyrics. The results aren’t always as funny as the band thinks they are, but the Everly Brothers harmonies on “Creepy” and the biting satire on playing the club scene,“Middleground” are undeniably fun. The haunting “Morning Blue” is the closest these talented jokers come to doing a normal tune.

Veteran studio singer Josie Falbo gets help from several local musicians while making the most of her debut CD Taylor Street on Southport Records. Covering traditional jazz, contemporary R&B, gospel, opera, and show tunes, Falbo’s versatility is particularly evident when comparing her sassy take on George and Ira Gershwin’s “Little Jazz Bird” with her reverent rendition of “Ave Maria.” She also performs her own composition, the jazz flavored “Love Found Me (Just In Time)” with help from Linda Clifford on backup vocals.

Singer-guitarist Dean Milano's expressive vocals reflect decades of performing folk music. An author as well as a musician, his tales of loners, truck drivers, and late-night hitchhikers on Something To Think About ring true and often have a dose of humor. “I’m Proud To Be Ignorant” is like shooting fish in a barrel, but Milano crafts sharper satire on “Musical Chairs” and the title track. Throughout the CD, there’s a sense of Milano carrying on a rich tradition.