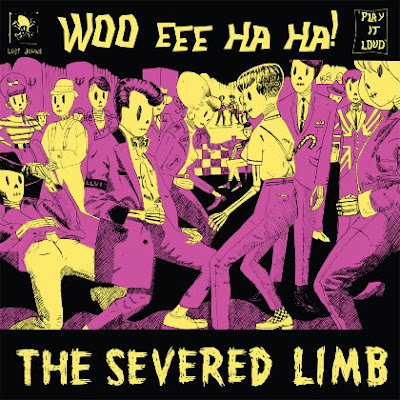 I’ve written about The Severed Limb on two occasions for Broken Hearted Toy. The first was a favorable review of the London-based skiffle band’s 2010 Woo Eee Ha Ha! EP, and more recently I covered its Double Sea Side single, “Take You Out”/”Southend Skiffle Rag.”

Today’s post harks back to band’s earlier days and a song called “The Severed Limb.” The original demo is now available on the band’s MySpace page, and would certainly be a worthy addition to any Halloween party playlist. The band also recorded a newer version which hopefully will be released soon.

“The Severed Limb” has a catchy rockabilly arrangement and clever lyrics about a guy who hears a knock on his front door at 4:00 AM and finds nothing more than a detached hand and arm waiting to greet him. “It didn’t have a brain and it didn’t have a bum/Just a tattoo on the arm that said I love Mom.”

After letting itself in, the appendage decides to stay, and the guy learns to enjoy its company. The only drawback seems to be the occasional obscene gesture the severed limb makes while playing poker or gin. “It makes the finger when it loses and makes a fist when it wins.”