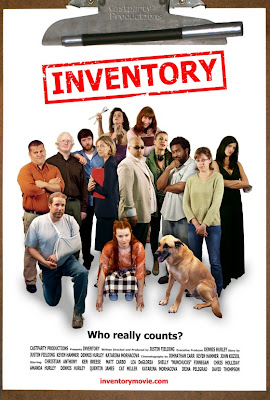 Indie film producer Justin Fielding describes his new flick, Inventory as a cross between The Breakfast Club and Clerks. A collection of misfits discover each other’s quirks and troubles while being stuck together for several hours, but in this case, they’re in a retail setting rather than a high school detention room. The employees of a furniture store are charged with taking inventory during off hours, but are more interested in making out or otherwise slacking off.

Perhaps remembering how much the song “Don’t You Forget About Me” by Simple Minds did for The Breakfast Club, Fielding decided he needed to put together a killer soundtrack for Inventory. One of the first bands that came to mind was Shoes, who like Simple Minds, have a history of creating melodic pop tunes about romantic relationships. As Fielding states on the film’s website, the more he delved into the Shoes’ catalog, the more difficult it became to pick which tracks he wanted to use. He finally settled on “Cruel You,” “Found A Girl,” and “Twist And Bend It,” which aren’t the best known songs by Shoes, but they’re definitely power pop gems.

Fielding, who directed and wrote Inventory, based on a story by himself, Kevin Hammer, Dennis Hurley, and Katerina Morhacova, also picked “Either Way,” by The Nerk Twins, a duo comprised of vocalist-guitarist Herb Eimerman and Shoes vocalist-guitarist Jeff Murphy. Other selections on the soundtrack include “Time Is Running Out” by International Pop Overthrow vet Jeremy, “It Must Be Time For Bed” by Stackridge, “Timpani Heart” by The Sun Sawed In 1/2, and “Watch The Movie” by Lolas. The full list of songs for the soundtrack can be viewed on the Inventory website. As of yet, there is no definite decision yet on whether the soundtrack will be available for purchase, either on CD or online.

Fielding plans to show Inventory on the film festival circuit prior to its commercial release. In the mean time, he’s already received praise for the soundtrack from International Pop Overthrow founder David Bash, who's quoted on the film's website as saying, “If you’re a melody freak, then the music alone is a big reason to look forward to seeing - and hearing - this new indie film!”

(Thanks to Herb Eimerman for bringing this film to my attention.)