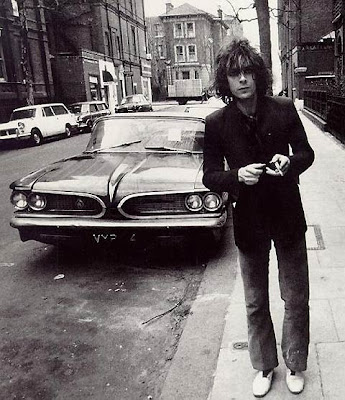 Lost At E Minor, the web-based newsletter that covers various aspects of the arts, reported recently on what it calls the largest ever Syd Barrett exhibit. A link to the U.K. Idea Generation PR agency’s website features a post by Rachel (no last name given) on Syd Barrett/Art and Letters, which will run from March 18th through October 4th at the agency’s Gallery space in London. The exhibition will include photographs, Barrett’s love letters, and his art. Rosemary Breen, Barrett’s sister, is quoted as saying, “Syd would be so surprised and pleased to know this exhibition is taking place. He was never more content than when sketching or painting, be it cartoons, abstracts, or still life.” Idea Generation vows that Syd Barrett/Art And Letters will shed new on the late musician’s art and music. The exhibition will also celebrate the release of the book, Barrett: The Definitive Visual Companion.

Today is the last day fans of The Strokes can get a free download of their new single, “Under Cover Of Darkness” on the band’s website. It will be available for purchase on iTunes starting February 15th. The Strokes’ full-length CD Angles hits stores on March 22nd, and there will also be a limited edition “Under Cover Of Darkness” 7 inch single released as part of National Record Store Day on April 16th.

Four bands will be on bill at Martyr’s this February 25th, including Secret Colours, Hollus, Warm Ones, and King Sparrow. Show starts at 9:00 PM.Tickets are on sale for $7 though February 14th at The Reader's Real Deal site.

Dot Dot Dot, Palatine’s gift to the techno pop scene, will be at The Bottom Lounge tomorrow night, and they’re bringing a bus load of people with them. Fans can climb aboard just before the bus leaves Durty Nellie’s in Palatine at 7:00PM and enjoy BYOB food and alcohol all the way to Chicago. The few remaining tickets for the sojourn can be picked up at the band’s website. The show at The Bottom Lounge starts at 9:00 PM.

Glenn Tilbrook recently posted on Facebook that Squeeze will be playing a one night only show backed by an 18 piece orchestra at The Royal Albert Hall on March 22nd. It’s a benefit for the Teenage Cancer Trust. The Feeling is also on the bill.

Phil Angotti’s People And Places CD release party has been rescheduled for Thursday, February 17th at the Park West in Chicago. I’m guessing the original gig got postponed because it was amidst the historic blizzard and cold snap. In addition to performing the songs from the new CD, Angotti and a group of friends will be serving up some older material and cover tunes. Guest musicians include Mike Zelenko, Carolyn Engelmann, Tommi Zender, Casey McDonough, Ellis Clark, Charlie Short, Eric Howell, Nick Boettcher, Martha Larson, Charlie Piper, and others. Those in attendance will also get to see a new Angotti video featuring local musicians. Admission is $10 and the show starts at 8:00PM.

In a touching example of how closely knit the local music scene is, Angotti made sure his rescheduled gig would not conflict with either of the two Lou-Aid benefits planned to help local musician Lou Hallwas (Penthouse Sweets, The Differents) with bills from a recent hospital stay. The next Lou-Aid showcase takes place on the 24th and will feature The Handcuffs, Tomorrow The Moon, Penthouse Sweets, Organ Wolf, and We Repel Each Other. Suggested donation is $10 or more.

Heart will be featured prominently in the upcoming Rock And Roll Hall Of Fame’s Women Who Rock: Vision, Passion, Power exhibit, which will cover female artists from the 1920s up to today. In an interview on the museum’s website, Ann Wilson reflects on the changing role of women in the traditionally macho genre since the days she and her sister Nancy first broke the gender barrier. “When Nancy and I came on the scene in 1976 we encountered constant sexism,” Wilson states. She feels that today’s female rockers have much more freedom, but that it’s still a struggle. “I would advise young, aspiring female musicians to be ready to make astounding sacrifices to get where they want to go.” Women Who Rock: Vision, Passion, Power opens at the museum on May 13th. The Rock And Roll Hall Of Fame is also presenting Girls On Film: 40 Years of Women In Rock, a photography exhibit that opens on Valentine’s Day.

Rock Art Show, a company that sells music-based art and photography, is celebrating The Beatles’ first appearance on The Ed Sullivan Show 47 years ago with a 21 x 27 inch framed piece that includes a photograph of the band performing the TV program, surrounded by other items related to the youngsters from Liverpool, like a replica of a ticket, miniature albums covers, and buttons. Rock Art Show also has framed art of The Beatles by Ron Campbell and Al Hirschfeld.