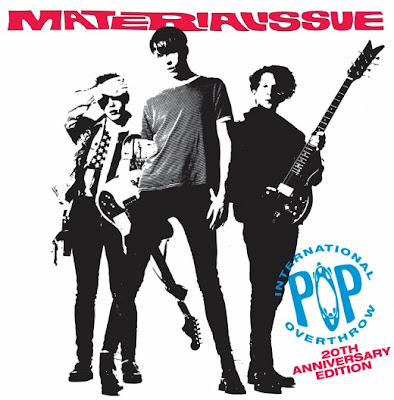 WXRT and the blogs Second Disc and Slicing Eyeballs are heralding the arrival of a 20th Anniversary edition of Material Issue’s flawless debut, International Pop Overthrow. The CD will be on the Hip-o Select label, with eight bonus tracks, including covers of Thin Lizzy’s “Cowboy Song,” Sweet’s “Blockbuster,” and Simon And Garfunkel’s “The Boxer.” The April 5th release for International Pop Overthrow comes just a few weeks before the globe-trotting power pop festival that bears its name returns to Chicago.

Mike Zelenko, the former drummer for Material Issue, was on hand for singer-guitarist Phil Angotti’s People And Places CD release show at the Park West last night. Angotti has created a fun video for the song “Parting For A While” that recreates that touching/funny “This Boy” scene featuring Ringo Starr in the Hard Day’s Night movie. The new video also makes a stop at Quencher’s Saloon, with local musicians such as Brad Elvis making cameo appearances.

Former Romeo Void singer Debora Iyall has announced on Facebook that she will be sharing a bill with The Motels on March 25th at the Red Devil Lounge in San Francisco.

The Raveonettes will release their fifth CD, Raven In The Grave on April 5th. According to a press release, vocalist Sharin Foo says the duo is taking a different approach this time out, opting for a sound she describes as “dark but not bleak.”

Happy Birthday to Matt Dodge, the singer-guitarist who fronts the Minnesota-based Matt Dodge & The Lobsters. The band proved to be a pleasant surprise at last year’s International Pop Overthrow - Chicago last year by exceeding the boy band impression I got from its MySpace page with a hard-hitting set of power pop. Hope they’ll be back again this year.

Rolling Stone is reporting that the original lineup of The Cars, with the exception of Benjamin Orr, who passed away in 2000, have recorded a new CD. Move Like This will be released on May 10th, but so far, Ric Ocasek and company have no definite plans for touring.

Tickets for Wax Trax Retrospectacle, a tribute to the influential industrial label that will include performances by Front 242, My Life With The Thrill Kill Kult, and Chris Connelly,among others, will go on sale tomorrow. The show takes place on April 15th at Metro.