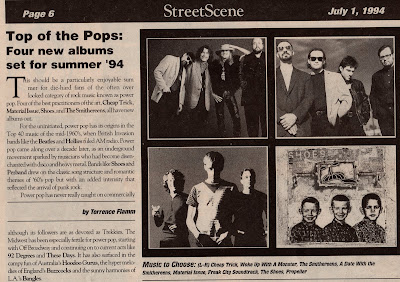 I was once a regular contributor to Streetwise, the Chicago publication created to help homeless people become self-sufficient. I attended the very first public meeting that was held, and stuck with the paper for about three years. I covered a variety of entertainment.

One of my efforts from 1994 was a feature titled Top Of The Pops, in which I started with a brief introduction of power pop, and then went on to review Propeller by Shoes; Woke Up With A Monster by Cheap Trick; Freak City Soundtrack by Material Issue; and A Date With The Smithereens by The Smithereens. I gave them all a thumbs up.

In other issues, I reviewed Random Acts, a various artists CD put out by radio station Q101 to benefit Clara’s House, a shelter for women and children; the very first ONXRT Live From The Archives; and Alternative NRG, a Greenpeace Benefit CD. I spotlighted a cool record store called Vagabond Music on Lincoln Avenue that carried a variety of indie acts. I interviewed the improv dance trio Outabounds, as well as Mary-Arrchie Theatre’s Artistic Director, Rich Cotovsky.

Back in those days, it always aggravated me when people said they only bought Streetwise to be nice, and threw it away without ever reading it. I attended staff meetings where editors strived to find ways to make the paper interesting. I’m sure the same holds true to today. Streetwise continues to cover the theater scene, restaurants, and art, as well as Chicago’s turbulent political scene. So the next time you shell out $2 for a copy, take a peek inside.