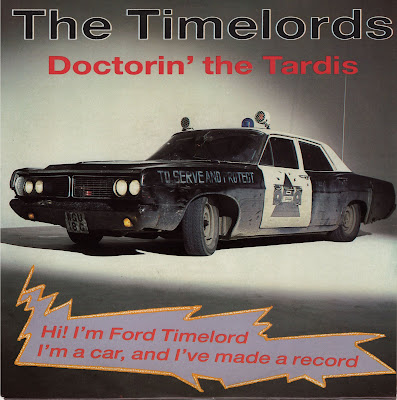 The online entertainment and art newsletter Flavorpill recently had a link to a clever blog hosted by Chris Hardwick called Nerdist. A February 8th post by Danny Damore dealt with artist Bob Canada’s latest work, Doctor Who Infographic; a sort of cartoon wall chart explaining everything there is no know about the long-running British sci-fi series.

It’s not only great fun for those of us who have followed Doctor Who for almost as long as the title character has been time traveling, it’s also an eye-catching work that should delight even non-fans.

That brought to mind the 1988 import single “Doctorin’ The Tardis.” Released on TVT Records, it’s a mash up of Gary Glitter’s 1970s glam anthem “Rock And Roll Part 2” and the Doctor Who theme. There’s also some robotic dialogue as the show’s chief villains, the Daleks deliver their catch phrase, “exterminate!” over the tribal beat. The record is credited to The Timelords, a fictional trio whose front person, or front vehicle, is a police car named Ford Timelord.

Sports fans across America (the world?) know “Rock And Roll Part 2” as a rally song, so if The Doctor ever decides to become a professional athlete, “Doctorin’ The Tardis” could be his theme song. Actually, the Matt Smith version of The Doctor did play soccer in one episode, but that wasn’t in a stadium.