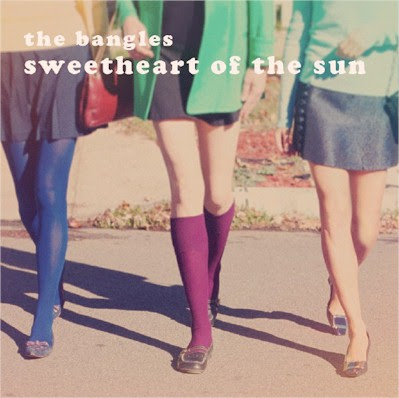 Let It Go, Sweetheart. The Bangles have released more info regarding the vinyl 45 record they’re putting out as a sneak preview of their upcoming CD. It will feature the new song, “Sweetheart Of The Sun,” along with acoustic takes on “Hazy Shade Of Winter” and “Let It Go,” as well as a cover of Matthew Sweet’s “Anna Lee.” Sweet has been working with the band on their new disc, and he recorded two CDs worth of cover tunes with Susanna Hoffs. The Bangles official website says the 45 will be available at all Maurice’s, but hopefully, there will be other purchasing options for those of us who don’t have one of the trendy clothing store’s locations in our vicinity.

Pete Says Hello And We Hit The Ceiling. There’s also good news concerning the return of another power pop band that started in the 1980s. Peter Holsapple recently tweeted that the long-awaited dBs album is almost finished. He added, “Thank you for your patience. It will be rewarded, I think, exponentially.” It’s a safe bet he’s right.

Feel Lucky, Punk? Elvis Costello is coming back to Chicago, and he’s bringing his spinning wheel with him. Tickets go on sale tomorrow for the May 15th date of Costello’s “The Revolving Tour,” AKA The Return Of Spectacular Spinning Songbook at the Chicago Theater. He’ll be backed by The Imposters as he plays tunes randomly selected by audience members who play a sort of mammoth roulette game. Costello has used the device in the past, and I believe it resulted in him covering songs by other artists as well, such as “King Midas In Reverse” by The Hollies.

We Know Something About Tomorrow. The Bad Examples have just released an impressive new CD in Smash Record. Meanwhile, the band’s guitarist Steve Gerlach will be performing with his sci-fi rock side project Tomorrow The Moon at Beat Kitchen on February 24th as part of the Lou-Aid benefit. It’s the band’s first show in almost half a year.

Two For Lou. Actually, several bands will be coming together for Lou-Aid on a pair of Thursday nights later this month. Proceeds will go to help musician Lou Hallwas (Penthouse Sweets, The Differents) with bills from a recent hospital stay. The showcase on the 10th at Quenchers features Suzy Brack And The New Jack Lords, Phil Angotti, The Webstirs, John’s People, and Hallwas himself. The showcase on the 24th at Beat Kitchen will see performances from The Handcuffs, the previously mentioned Tomorrow The Moon, Penthouse Sweets, Organ Wolf, and We Repel Each Other. Suggested donation is $10 or more.

Rocking In Palatine. Yellow Matter Custard, a band comprised of veteran musicians Mike Portnoy, Neal Morse, Paul Gilbert, and Kasim Sulton, will be performing A Tribute To The Beatles at Durty Nellie’s in my humble hometown on Sunday, February 27th, at 7:30 PM. The $30 tickets are available exclusively at The Drum Pad, which is located at 48 W. Palatine Road, a short walk from Durty Nellie's.

FIF Goes On Without Me. My old comedy group Famous In The Future will air its latest TV special this Monday night at 9:00PM on Channel 19 Cable Access in Chicago. The show will include skits like the children’s tale/political movement mashup “Alice And The Tea Party” from Famous In The Future’s appearances at the past two annual Abbie Fests at the Mary-Arrchie Theatre. It can also be seen on Channel 19 on Tuesday, February 8th at 4:00PM, and Saturday February 26th at 10PM.

Be Sure To Bring Them Something Silver. Speaking of Mary-Arrchie, the theatre will be staging a 25th Anniversary Benefit on June 13th at the Mayne Stage venue on Chicago’s north side. Tickets go on sale tomorrow. Hats off to Rich Cotovsky and the crew for all those years of in-your-face theatrical productions, and for creating the annual Abbie Hoffman Died For Our Sins festival.

I Am The Eggman, I Am The Clay Man. Sarah Louise Klose contributed a short item to the File column of this month’s Illinois Entertainer about an artist named Taylor Zitman, who creates hand-designed polymer clay figures of rock and roll stars. The photo showed The Beatles in their Sgt. Pepper gear, and Zitman has also molded likenesses of Lady GaGa and Amy Winehouse. She sells her creations for $50 to $70, depending how much work is involved. Special orders can be made through her website.