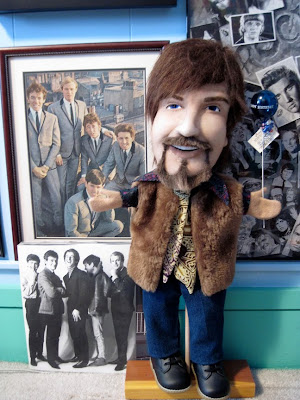 Today’s post is a celebration of Graham Nash’s birthday involving some of the items from my rock and roll memorabilia collection.

The Graham Nash figure is a soft sculpture I had custom made by an artist I met at The Wells Street Art Fair a few years back. It appeared in three episodes of Manchester Gallery, the comedy series my wife Pam and I created for the Sunday Morning Coffee With Jeff Internet show.

The framed autographed photo of The Hollies in their very early days was a gift from a fellow Hollies fan for my 50th birthday.

The third item is a book of rare photographs called Through The Ages - Volume 1, which was put together by Hollies drummer Bobby Elliott from his archives. It's available from the band's official website. I recently e-mailed Mr. Elliott to tell him I had reviewed his book on my blog (see Archives, December 2010) and he was kind enough to write back and thank me. He added that he hopes to create a Through The Ages - Volume 2 soon.

A few years ago, I had the honor of interviewing Graham Nash (see December, 2009) for the Illinois Entertainer and he mentioned a new CD of 1960s cover tunes that he was going to be recording with Stephen Stills and David Crosby. That CD hasn’t been released yet, but reportedly, it’s moving closer toward completion.

So here’s a birthday wish to Graham Nash, a true star of the original British Invasion, and architect of the California rock sound. May we always enjoy his music.