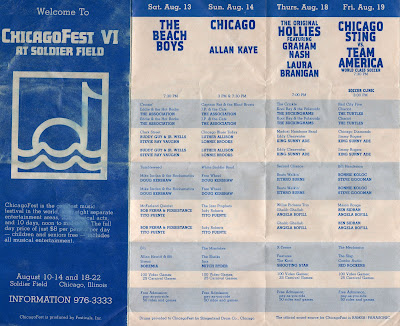 With all the talk around town about cutting back on the big name acts at Taste Of Chicago, and then tossing Celtic Fest and other formerly stand-alone events into the watered-down mix, it might be a good time to remember ChicagoFest. This 10-day outdoor celebration sprang to life on the lakefront every August, from the late 1970s through 1983. From what I can remember, ChicagoFest was always viewed in some quarters as an extravagance the city could ill afford, but for music fans, it was pure heaven. If one of the current mayoral candidates could figure out a way to bring it back, and make a profit, that would be something worth voting for.

ChicagoFest already had one foot in the grave by the time number VI came around. It had been abandoned by the mayor’s office and shagged from its normal home at Navy Pier (before its transformation into a major tourist attraction) and relocated to Soldier Field (before its transformation into whatever it’s supposed to be now). Still, this Chicago Park District managed version drew an amazing assortment of acts that could be enjoyed for a paltry $8 per day admission.

As an avid Hollies fan, I was thrilled with their performance. A mist rolling in off Lake Michigan gave that night’s performance an added tough of magic as the band played a number of its biggest hits. The Allan Clarke-Graham Nash-Tony Hicks harmonies were perfect, and the concert ended with an extended version of “Long Cool Woman” that included a bit of the old standard “Shakin’ All Over.” Afterward, the crowd was chanting, “Hol-lies, Hol-lies, Hol-lies!”

Each year of ChicagoFest brought another banquet of astounding talent. I can still remember picking up the schedules in record stores, and planning how many nights I would be going. By comparison, Taste Of Chicago, even before its recent downsizing, has always seemed like barely a mouthful.

Are we talking the old Navy Peir days ? didn't see that one but saw lots of great acts at those great old fests..

I really loved covering Chicagofest but didn't like it at all at Soldier's Field. I remember photographing Stevie Ray Vaughn there as well as Gary Puckett and remember trying to get a cab back downtown was like pulling teeth.

William and Linda: I liked ChicagoFest much better when it was at Navy Pier, but I still found a lot to like at the Soldier Field version. As Linda noted, the transportation was more difficult.

Wow, what a blast from the past. I never got to go but I do remember that logo!