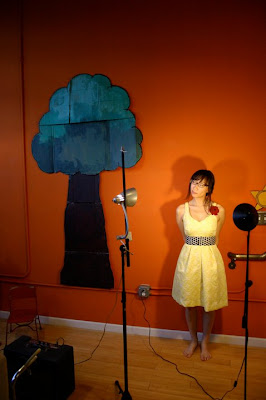 Finding a reverent version of “Edelweiss” from The Sound Of Music on Jane Lui’s latest CD, Goodnight Company is a good indication that this is an indie rock artist who follows her own path. Lui’s compositions are set to slow, spare arrangements that she occasionally embellishes with horns and string arrangements. Her poetic lyrics, which take an offbeat view of romantic relationships, are exquisitely rendered in a vocal style similar to Joni Mitchell’s.

Lui captures the fun and adventure of a new love on the fetching “Jailcard” by declaring, “Tonight I got a ticket to a man.” On the more bitter “Perished,” she dismisses a lover with lines like, “Off you go with a foolish mouth” and “So take a bow and say goodbye.” The acoustic “Illusionist Boy” is particularly reminiscent of Mitchell, while “Take Me For Now,” with its ornate instrumentation, has more of a musical theater feel. “New Jersey” has Lui dabbling in R&B, and the CD closes with the stark but beautiful spoken word piece, “Last Rose Of Summer.”