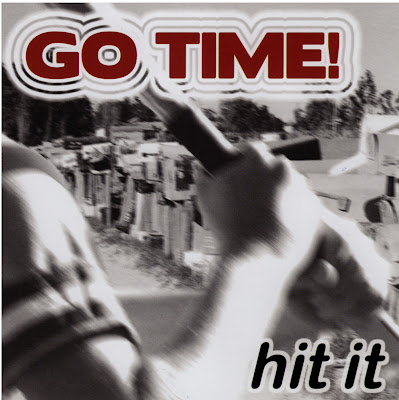 Go Time! describes its musical approach as taking power pop to less-traveled latitudes, but after listening to Hit It, it might be more accurate to say the Chicago-based band brings power pop melodies to hard rock. Certainly, the inspiration for the 14 energetic songs on this follow-up to Go Time!’s 2009 debut Speak comes from The Rolling Stones rather than The Beatles. The CD has a raw, live performance sound fueled by the twin guitars of vocalist-guitarist Scott Niekelski and guitarist-vocalist Paul Schmidt. Niekelski has a no frills singing style, and although Schmidt, drummer Steve Grzenia, and bassist Mark Marketti provide backup vocals, you won’t find the lush harmonies often associated with power pop.

The band never loses track of the melody while charging through songs like “Sudden Death” and “Wilmette,” and adds a high speed instrumental coda to the already impressive “Happy End.” The mid-tempo “Lawn & Garden” has a Creedence Clearwater Revival feel, while “One & Lonely” taps into catchy garage rock. Toward the end of Hit It, some of the riffs start to sound the same, and Go Time might want to think about exploring more variations on its vocal arrangements. Still, this is a solid effort from a group that has pretty much staked out its own territory.