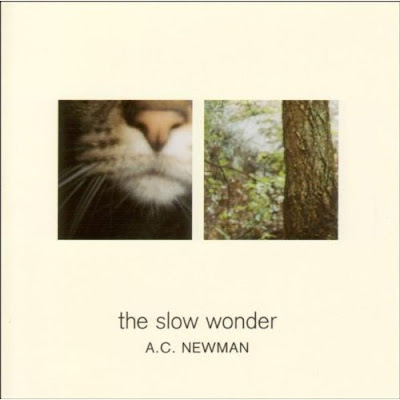 Note: This review originally appeared in the Illinois Entertainer in 2004.

Singer-guitarist A.C. Newman’s solo debut follows on the heels of the New Pornographers’ most successful release, Electric Version. Before finding success with that band, Newman logged time with Canadian popsters Zumpano. He draws from both experiences to give The Slow Wonder a high level of quality while establishing an engaging persona.

Whether working with Sarah Wheeler or over-dubbing his own voice, Newman creates lush layers of vocals for most of the CD’s 11 tracks. “Secretarial” delivers irresistible hooks as Newman and Dave Carswell cut loose on guitars, while “The Battle For Straight Time” offers funhouse keyboards and whistles.

The Slow Wonder is also notable for Newman’s willingness to experiment with various styles and tempos. “Drink To Me, Babe, Then” is a playful tune with a shuffling beat and wistful vocals. “The Town Halo,” a melodic power pop tune that feature Megan Bradfield’s aggressive cello playing, may be the best example of Newman’s ability to blend various elements into compelling music. That should serve him well on future CDs from the New Pornographers, as well as for his solo work.