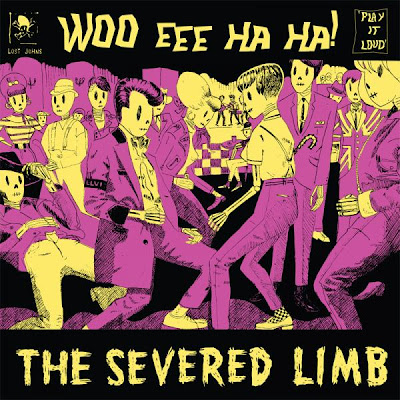 You know you’re in for a party when a band names its debut Woo Eee Ha Ha! and has hip-looking cartoon skeletons ska dancing on the front cover. Self-described on their MySpace page as “Those amazing skiffle kids,” The Severed Limb features an accordion, double bass, and washboard. These guys still play gigs on the streets of London even though they’ve opened for Imelda May and other better known acts. The four songs on Woo Eee Ha Ha! have fun, stripped-down arrangements and energetic harmonies that exude the excitement a live performance.

The easy-going title track is a tongue-in-cheek celebration that describes playing at the local county hall as a major accomplishment. On “Kill You,” The Severed Limb adds some vintage Country & Western to a tale of the dangers of fooling around. After hearing the unusual threat of, “First I’m gonna kill you, then I’m gonna bill you the price of the bullet,” a guy decides he’ll be safer spending the rest of his life at sea.

“Shake It Senora (Laid Back Version)” is a slower, exotic number while the slinky “Making Out On The Couch” evokes The Stray Cats and Brian Setzer Orchestra with its twangy guitar. The Severed Limb has demos of other entertaining songs on its MySpace page, particularly “The Severed Limb,” which is a hilarious rock-a-billy song about a guy who befriends a detached hand and arm that crawled through his hallway and showed itself in. Hopefully, it will be on a future release. In the meantime, Woo Eee Ha Ha! is available on iTunes, as well as in a vinyl format.