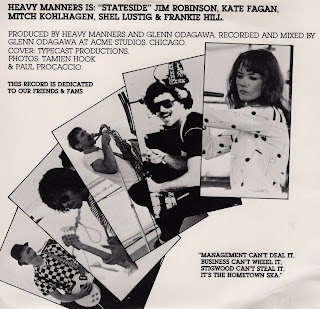 Released in 1981 on the local Disturbing Records label, Heavy Manners’ “Taking The Queen To Tea” still brings back memories of packed clubs on Chicago’s north side and freewheeling outdoor festivals. The ska band was at the height of its popularity then, and this irresistibly catchy tune shows why. It’s a fun satire about partying with the Royal Family, written by bassist Jim Robinson, and featuring suitably bratty vocals by Kate Fagan. Other band members included drummer Shel Lustig, moonlighting from his job at radio station WXRT, guitarist Mitch Kohlhagen, and sax player Frankie Hill.

The “tea” being offered to The Queen comes rolled up in a spliff rather than in a china cup, as Fagan notes, “It won’t be the kind she’s accustomed to, but what the hell, it’s on me.” Kohlhagen’s guitar drives the beat but there’s also a peppy keyboards passage. The party continues on the B-side with “Hometown Ska.” It sports a faster arrangement, more in line with what was coming over from England at the time, and celebrates music’s ability to free people from their everyday drudgery. Hill penned the song, and it features his spirited playing throughout.

Heavy Manners would release the Politics & Pleasure EP a year later, and in 1996, several of their songs were collected on the impressive Heavier Than Now CD. Heavy Manners played a gig at a Lincoln Avenue street fair this past July.