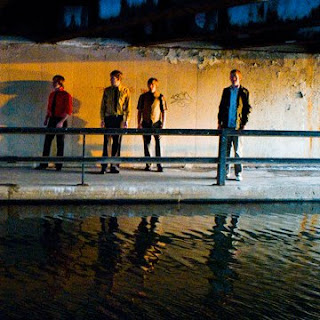 JR, the fourth full-length effort from Chicago-based Jonny Rumble gets off to a shaky start with “Cox Road,” an off-kilter song about a troubled relationship. Things improve from that point on, and at least the opening track alerts listeners that there’s no way to predict what direction this rambunctious quartet will take next. Throughout the CD, cryptic lyrics are set to infectious melodies, as lead singer-guitarist Brian Webb weaves his way through playful harmonies supplied by all three of the other band members.

Jonny Rumble sounds like a darker, more political version of Supergrass on “Handgun Blues” as a guy decides to keep his weapon locked in the house to avoid the temptation of shooting the people he passes by on the street. The explosive first single, “BRZRKR,” sets violent imagery to a galloping beat, while the slower “Victim Of The Times” mixes Latin rhythms with eerie keyboards. “Opportunities” is a high energy social satire that sports some of the band’s best vocal interplay and slips into an acoustic guitar and strings coda. The engaging “Toe The Line” finds Jonny Rumble working in an acoustic vein, and they tap into Country & Western on “Time” and “Stumped.”