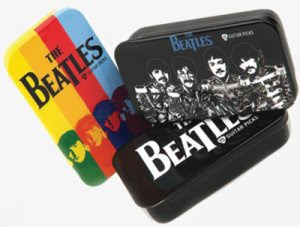 I’d like to wish a Happy Thanksgiving to everyone who visits this blog. Even if you’re not a U.S. resident, you should still take a moment today to ponder a few things to be grateful for.

I used to get up early on every Thanksgiving so that I could run over to the grocery store before they sold out of their copies of the Chicago Tribune and Chicago Sun-Times. On Thanksgiving, these papers are stuffed with flyers advertising bargains for Black Friday, the biggest shopping day of the year. Now I get both papers delivered. I’ve always found it fascinating to discover what’s currently available in the retail world, even though I’m not one to brave the hectic shopping mall crowds on the day after Thanksgiving. Today’s post is a much more compact, rock and roll oriented shoppers’ guide to what to give or ask for this holiday season.

First up, is The Fest For Beatles Fans 26th Annual Holiday Sale! catalog, which arrived in the mail about a week ago. Billed as the “World’s Largest Beatles Catalogue And Webstore,” it offers just about everything a devotee of John, Paul, George, and Ringo could dream of, from the more obvious items like t shirts, mugs, and figurines, to the more unusual things like cufflinks, bottle openers, lamps, socks, and undies. Sometimes it’s the small things that fascinate me; like a tin with a striking black and white graphic of The Beatles in their Sgt. Pepper garb on the cover, filled with guitar picks.

The only thing that bugs me about The Fest For Beatles Fans catalog is that it’s such an embarrassment of riches for the followers of a single band. I already own five Beatles mugs, three sets of Beatles figurines, and four Beatles t shirts. What if I wanted a Kinks t shirt, or a coffee mug with The Move on it? Mamas & The Papas pajamas or a baseball cap with a Dave Dee, Dozy, Beaky, Mick & Tich logo on it? Status Quo socks? Occasionally, fans can find rock paraphernalia stores in malls that carry a variety of items for several bands, but probably the best place to look is on your favorite band's website.

The Bangles offer a selection of t shirts for men and women on their site, as well as a cap, and two styles of tote bags. The band frequently puts items up for bid on eBay, with the profits going toward some charitable organization. The Hollies have tour books, a cap, and two styles of shirts for sale, along with a few badges. I recently purchased Through The Ages - Volume 1, a scrapbook filled with photographs from drummer Bobby Elliott’s private collection. It’s a Christmas present to myself, so I haven’t opened it yet, but it’s in the same format as the tour books.

Another rock gift idea is the new Live From The Archives Volume 12 from WXRT, which features live performances that have aired on the station over the years. A subscription to Mojo, Q, Rolling Stone, or Shindig would surely be appreciated, and there’s an ad in the latest issue of Shindig for a book called Endless Trip, which pulls together vintage album reviews, illustrations, and color photos of American and Canadian bands from the 1960s and 1970s. It’s published by Foxcote Books, which also published a British version called Galactic Ramble last year. You’ll find plenty of eye-popping posters and framed art of artists like Jimi Hendrix, Pink Floyd, The Doors, and Led Zeppelin at the Rock Art Show website.

You can do your own Black, or Rock Friday shopping with some energetic web surfing. Happy Thanksgiving to all, and be sure to give the gift of rock.