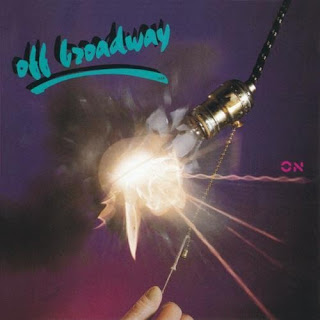 Veteran power pop vocalist Cliff Johnson played a gig at the Penny Road Pub in Barrington last weekend to showcase his new band, and celebrate the release of a 28-song double CD that serves as an anthology comprised mainly of unreleased material. I’m hoping to review it in the near future, but in the meantime, here’s another post from last year’s 31 Songs For Halloween collection. It features a track from the impressive debut from the Cliff Johnson-led band, Off Broadway.

Few objects have appeared in more scary movies, novels, music, and art than the full moon. It can transform a man into a werewolf, it provides the perfect backdrop for a witch flying on her broomstick, and as we learned in the Pink Floyd masterpiece, Dark Side Of The Moon, it will bring lunatics to your hallway. The Moody Blues called it a “cold hearted orb that rules the night.” Back in 1979, the Chicago power pop band Off Broadway reflected on lunar-related madness with “Full Moon Turn My Head Around,” from its flawless debut, On.

The song captured the party atmosphere that had made Off Broadway’s live performances so much fun. After introducing his fellow musicians and their mission, “We got a band, we got good, good band, we got a good band/We got a beat, we got a U.S. beat, we got a good beat,” lead vocalist Cliff Johnson confesses that he’s feeling edgy and a little crazy. The cause can be found directly above him. “When the moon is full a boy like me can definitely lose his head.” His comic, maniacal laugh recalls Napoleon XIV on his novelty hit, “They’re Coming To Take Me Away.” Meanwhile the band charges through a frantic but highly melodic arrangement.

It’s crazy that Off Broadway never achieved the mass success it deserved, but at least the band is still regarded as one of the finest examples of Midwestern power pop.