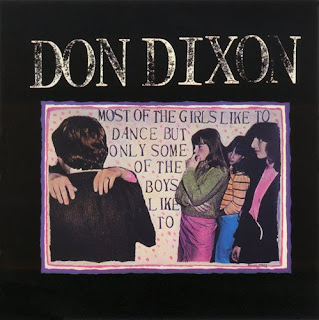 There will be two great nights of music this weekend at The Abbey Pub as Last Rites stages its third annual Halloween Fest. On the 29th, Tomorrow The Moon will perform as Pink Floyd; Penthouse Sweets will kover The Kinks; and Ellis Clark and Epicycle, with special guest Phil Angotti, will recreate The Beatles’ famous rooftop performance. There are other fun tributes on the bill as well.

The lineup for the 30th will see the return of Phil Angotti, this time as Buddy Holly; The Webstirs as The Beach Boys, and Androstache as The Pretenders. Check out the Abbey Pub website for all the bands involved.

In the meantime, here’s a power pop entry from last year’s 31 Songs For Halloween.

Don Dixon is best known as a producer for artists like R.E.M., Let’s Active, and Marshall Crenshaw, but has also recorded his own work. “Praying Mantis” is on a 1985 album with the lengthy but truthful title Most Of The Girls Like To Dance But Only Some Of The Boys Like To. It’s a tongue in cheek pop song that likens giving into sexual temptation to the fate of the male praying mantis, who is devoured by the female while they’re mating.

Backed by a catchy, finger-snapping guitar arrangement, Dixon warns, “She bit off his head so he would not feel the pain./She wanted his body so bad she ate his brain.” This twangy, 1960s style tune would be perfect to dance to at a Halloween party, but be careful!