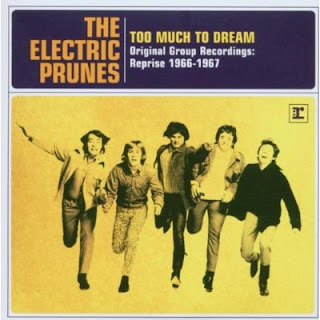 When “I Had Too Much To Dream (Last Night)” by The Electric Prunes blasted from AM radios back in 1966, it was immediately evident that it was different from any other Top 40 hit. Lead vocalist James Lowe kicked off the song by playing an autoharp that buzzed like a nuclear-mutated mosquito as he sang, “Last night your shadow fell upon my lonely room.” This apparition of an ex-girlfriend seeking to make up vanishes just as things are getting interesting. The lines “Your eyes were filled with love the way they used to be/And when your hands reached out to comfort me” are followed by one of best howls in rock history. (Along with the one on Deep Purple’s version of “Hush.”)

Surprisingly, the song was not written by a band member or any other heartbroken male. According to a post at http://www.classicbands.com/electricprunes.html, it was the work of professional songwriters Annette Tucker and Nancie Mantz, who envisioned it as a ballad. The Electric Prunes had other ideas, giving it a hard driving, psychedelic arrangement that makes it an undisputed garage rock classic to this day.