Walking In The Air 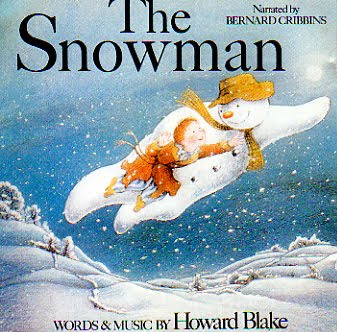 There are a lot of fun things to do in the winter but none could match the adventure a little boy experiences in Raymond Briggs’ 1982 Academy Award nominated short film, The Snowman.

There is no dialogue, but the beautiful crayon-like animation perfectly conveys the range of emotions a young English lad feels when the snowman he made comes to life at midnight. The boy invites the snowman in and has some funny mishaps while showing him around the house before the pair goes for an exciting motorcycle ride through the woods. The film’s high point is when the snowman whisks the boy off on a flight to the North Pole for a one-night visit with Santa Claus.

All of this action is set to Howard Blake’s rousing score, which is performed by the Sinfonia Of London. Peter Autry, a young boy from St. Paul’s Cathedral Choir, sings the inspiring ballad “Walking In The Air.” The soundtrack CD is virtually impossible to find, but at least the film is finally available on DVD.

Watching The Snowman has become a holiday tradition for me and my wife. It was also a one of my mother's favorite films. Merry Christmas to all who visit this blog.

Hi Terry -- Carla and I have a DVD of the Snowman, we also have a video cassette. It's a tradition with us too. Love when the kid flies in the air with the snowman. It's all stirring and beautiful and sad too -can't escape the big snow melt. Anyway this is a classic!