Ring In The New - Part One 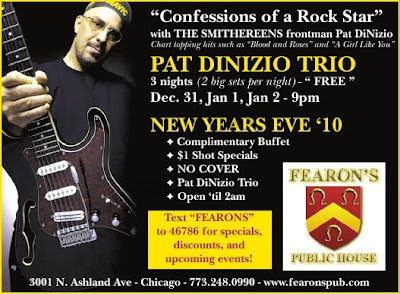 Just a few last minute suggestions for festive things to do in the Chicagoland area this New Year’s Eve.

The Pat DiNizio Trio, featuring the distinctive vocalist-guitarist from The Smithereens will kick off a three-night stand starting on New Year’s Eve at Fearon’s Public House at 3001 N. Ashland Avenue in Chicago. DiNizio has dubbed his trio’s round of gigs “Confessions Of A Rock Star,” which is also the name of his printed autobiography, as well as a soon-to-be-released multi-disc audiobook that will include several rare solo performances. I couldn’t find any info on what material DiNizio will play at Fearon’s or learn the identity of the other members of his trio, but it’s a safe bet this will be a fun night of power pop music. Plus, there’s no cover charge, and Fearon’s is offering a complimentary buffet. The music starts at 9PM. 773-248-0990

If you shell out $85 for a Rock Ticket to the New Years Eve Rock’n’Roll Ball at The Intercontinental Chicago O’Hare in Rosemont, you’ll have an opportunity to be part of ABC7’s “Countdown Chicago 2010” TV live broadcast. You’ll also get to see a pretty good band in The Gin Blossoms, who are poised to release their latest CD, Major Lodge Victory. The single “Learning The Hard Way” is already available on iTunes. Chicago rock veterans The Nicholas Tremulis Band are scheduled to open for The Gin Blossoms in the Rock Room. The Ball is being billed as three parties with one ticket since you can also catch Too White Crew and The Breakfast Club in the Party Room, and groove to DJ Roland in the Club Room. Price includes a 4 hour open bar and party favors. WXRT and The Reader are among the sponsors for this event. 847-544-5300

The Mary-Arrchie Theatre is holding a Misfits NYE Party again this year at its storefront location at 735 W. Sheridan Road. Artistic Director Rich Cotovsky and his crew have plenty to celebrate since their recent run of Fin Kennedy’s How To Disappear Completely And Never Be Found was a commercial as well as critical success. Note: this free BYOB Karaoke Bash is geared toward the acting community, although the Facebook invitation I saw says, “all party hoppers welcome.” This could be a great opportunity for newcomers to acquaint themselves with a theatre that has been on the cutting edge for 24 years.