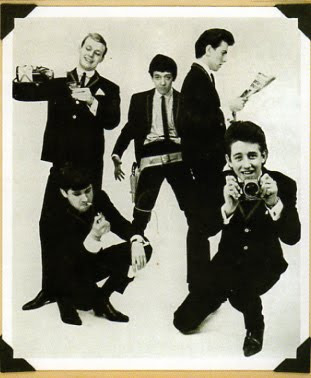 Pour that champagne, Bobby. It’s time to celebrate. That’s Nash, on the right, reading the news. Photo from The Hollies tour book.

The Hollies will be inducted into The Rock And Roll Hall Of Fame as part of a ceremony to be held in New York on March 15. The Class of 2010 also includes Abba, Genesis, and The Stooges, as well as eight nonperformers, including songwriters Barry Mann and Ellie Greenwich.

In order to celebrate this well-deserved honor, I’m posting the interview I did with Graham Nash for The Illinois Entertainer earlier this year. Note: Due to editing, the version that appeared in I.E. is slightly different from my original manuscript.

Forty years after he joined rock’s most enduring supergroup, Graham Nash entered 2009 with high expectations. Reflections, a three disc retrospective including his work with The Hollies, various incarnations of Crosby, Stills, Nash, & Young, as well as his solo efforts was released in February. America now has a president he likes, and CSN will mark its anniversary with a new CD that offers an unusual twist.

“Crosby, Stills, and I were at my house in Hawaii for the past ten days rehearsing a new record,” Nash said during a recent telephone interview from a hotel room in New York. Tentatively titled Laurel Canyon, it will be the first CSN effort comprised entirely of cover versions. The concept came from their label, Columbia.

“They want that vocal sound, which obviously is reminiscent of the ‘60s, ” Nash explained, “on songs that we wish we had written. And so far it’s going very well.” Plus, it circumvents a songwriting problem that has dogged the trio throughout its career.

“In an effort to keep this band as equal as possible for as long as possible, I always wait for four Crosby songs that we love, four of mine that we love, and four of Stephen’s that we love to make a balanced album,” Nash maintained. “But because David writes at a much slower pace than us, we have to wait and that’s why we haven’t done a lot of albums. The brilliance of the Columbia idea is that it takes that completely away.”

One downside of Laurel Canyon is that it will leave Nash precious little time to promote his own stuff. With Reflections following closely on the heels of a remastered version of his 1970 debut Songs For Beginners, the time would seem ripe for Nash to embark on solo tour. But so far, he only has a single performance on his plate.

“I have to fit it in with me and David and Stephen making a record and plans to go on the road, because of course, this is our 40th year,” Nash said. His 27 year old daughter suggested a gig near her home - - the California town of Grass Valley, which has a thriving music scene.

“She wants me to do a show that consists of me walking out there with a band and playing Songs For Beginners right the way through, track by track,” Nash said. “And take an intermission and then do all of [second solo album] Wild Tales.