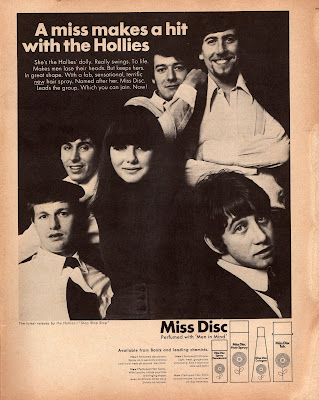 The sweet smell of success. The Hollies in a perfume ad from a Brit mag in the 1960s.

This is the second part of an interview I did with Graham Nash for the Illinois Entertainer earlier this year. I’m presenting it here to celebrate The Hollies’ long-overdue induction into The Rock And Roll Hall Of Fame.

It would be a shame if Reflections got lost in the shuffle. In addition to offering the hits “Marrakesh Express,” “Teach Your Children,” “Wasted On The Way,” “Just A Song Before I Go,” and “Chicago,” it gives lesser known tunes like the Country & Western flavored “You’ll Never Be The Same,” and the stark but powerful “Liar’s Nightmare” exposure to a larger audience.

Reflections also underscores the artist’s longtime commitment to important issues. “Barrel Of Pain” criticizes the dumping of nuclear waste off the West Coast, “Chippin’ Away” commemorates the crumbling of the Berlin Wall, and “Field Worker” demands respect for migrant workers. The question arises as to how Nash goes about writing songs like these and “Wind On The Water.”

“Let me set the scene for you,” Nash obliged, recalling an extended sailing trip he took with Crosby as vividly as if it had happened the day before. “It was my first sail. On that journey, I saw a blue whale. It was insanely lucky to even come across a creature that was half again as long as David’s boat, and David’s boat is 70 feet. That’s why I wrote “Wind On The Water” because we were killing these things, apparently for food, which sounds preposterous.”

Reflections also underscores Nash’s ability to create melodic portraits of personal relationships. “Simple Man” and “Our House” describe his late 1960s involvement with Joni Mitchell, while “Magical Child,” celebrates the joy of having his first baby with his wife, Susan.

“I’m a very ordinary person in many ways,” Nash reflected. “Yes, I’m relatively well-known for a couple of things that I’ve done. But I want an easy life. There’s enough chaos in this world, enough bad feeling, that a simple smile to a stranger can go a long way.”

Still, one wonders if Nash has an easier time penning a politically-charged call to action or a tribute to Susan, to whom he’s been married for 33 years.

“I never think about what’s easier or harder to write,” Nash said. “I’m just lucky that these ideas come to me. To people that have no background in music at all, the art of songwriting must seem magical. Where the hell does it come from? I don’t know. I’m just happy I can’t stop writing.”

Coming in Part Three: Nash’s view on politics, and The Rock And Roll Hall Of Fame.