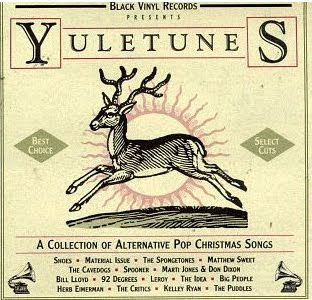 Once upon a time, before the retail industry ordained Black Friday as an extreme sports event for crazed bargain hunters, the day after Thanksgiving held significance as the official start of the Christmas season. It is in that antiquated spirit that I’m kicking off a series of posts related to holiday music.

Released in 1991 on The Shoes' Black Vinyl label, Yuletunes was an ambitious collection of original Christmas songs created by various power pop artists. Matthew Sweet, who contributed “Baby Jesus,” and Marti Jones and Don Dixon, who sang a duet on “Every Day Will Be Like A Holiday,” were the biggest names involved, and there were 13 lesser known acts from the Midwest. This will be the first of three posts on this classic Christmas album.

The Shoes had faded from rock’s mainstream by 1991, but “This Christmas” shows why they’ll always be revered in the power pop community. It’s a catchy rock song with a monster drum beat and chiming guitars that offers an optimistic view via harmony vocals. “Things will get better./Doesn’t seem like it now, but they always do.” Vocalist-guitarist Jeff Murphy would return to the theme of the importance of love over gifts during the holidays by having his kids sing the cute “The Christmas List” as the CD’s closing number.

I’ll continue with Part Two of my look at Yuletunes on my next post.

Shoes' "Yuletunes" is probably the album that triggered my obsession to find really good pop Christmas records that are somewhere left of center. This one is always in heavy rotation at my house during the holidays.