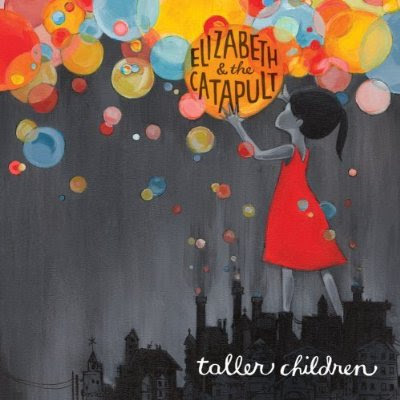 (This is a reprint of a review I did for the Illinois Entertainer a few months back.)

Elizabeth & The Catapult sounds more like a book kids would read than the name of a rock band. So maybe it should come as no surprise that many of the well-crafted songs on the trio’s latest release, Taller Children deal with people who still haven’t adjusted to the adult world. Singer/songwriter and keyboards player Elizabeth Abby Lynn Ziman renders these portraits with sharp lyrics, catchy melodies, and classic folk singer vocals.

“The Rainiest Day Of Summer” is an orchestrated tune that somehow evokes the 1940s while retaining a modern edge. “Momma’s Boy” has a ragtime feel sparked by Ziman’s playful piano playing and Maria Muldaur style vocals as she dismisses a beau who refuses to grow up. The quicker paced “Race You” captures the joy of childhood competition, while on the beautiful “Golden Ink,” Ziman sings, “everything is make believe.” The more electric “Hit The Wall” exudes a fighting spirit and “Right Next To You” casts a romantic spell via seductive vocals and a lush, soulful arrangement. The jazz-flavored title track adds yet another facet to Elizabeth & The Catapult’s eclectic approach.