Take It Out Of Petty Cash 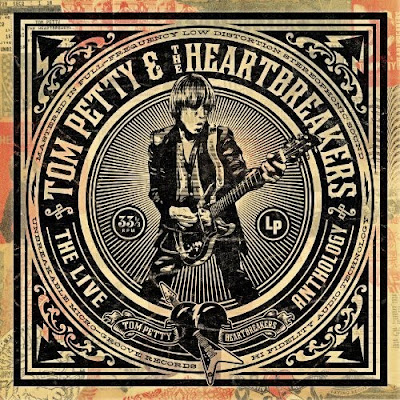 Loyal fans of Tom Petty & The Heartbreakers might end up with a whopping Christmas present this year, depending on which version of The Live Anthology Santa decides to bring them. Even the basic, four-CD box set is a genuine treat, filled with 47 songs taken from concerts ranging from 1978 to 2007. Scheduled to be released on December 1st, it will offer all the big hits like “Runnin’ Down A Dream,” “Here Comes My Girl,” and “Nightwatchman,” as well as some interesting covers, like Fleetwood Mac’s “Oh Well,” and Booker T & The MG’s “Green Onions.”

For the especially well-behaved Heartbreakers fan, there’s a UK Limited Deluxe Collectors Edition Multi-Format Box that will include five CDs, a Blu-Ray audio CD, two DVDs, a vinyl LP, and a book. The Deluxe Edition also comes with backstage passes, a reproduction of a poster of the band’s residency at The Fillmore in 1997, and a lithograph reproduction of the fetching front cover, which Amazon’s product description points out was created by artist Shepard Fairey of the Barack Obama “Hope” poster fame. For those who can’t wait to see if Santa (or a generous friend or relative) will reward them with The Live Anthology Deluxe Edition, Amazon is selling it for just over 200 bucks.

The release of The Live Anthology brings back memories of an impressive set from Tom Petty & The Heartbreakers I caught when they opened for Elvis Costello at a WXRT sponsored double bill at Chicago’s Riviera Theatre in 1977. Back then, there was some confusion as to what label should be slapped on Petty’s catchy, guitar-driven songs. Critics tended to lump him in with the punk movement, although that was clearly an awkward fit. Writing for a mag called Metro Entertainment Calendar, I described his work as, “music that has its roots in the pop of the 1960s but has been given the harder edge we’ve grown to expect from more modern rockers.” I totally missed the mark in my assessment of Costello, but that was back when I was knee-high to an amplifier.

Tom Petty & The Heartbreakers have remained a vital rock band for the past three decades, and The Live Anthology, whether it’s the basic or the deluxe set, is a great way to commemorate that achievement. Incidentally, I was really bummed that I didn’t nab one of the Tom Petty scarves WXRT staffers were tossing into the crowd at the 1977 concert. Now if I find one of those scarves under the tree this Christmas, along with the box set, I’ll know there really is a Santa Claus.

Index: Tom Petty and The Heartbreakers