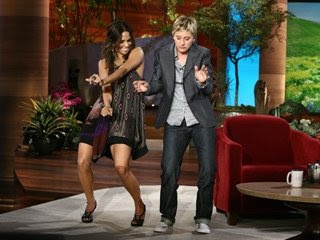 Ellen Degeneres came to Chicago today to join Oprah Winfrey on Michigan Avenue, where they autographed copies of the O Magazine that features both of them on the cover. It was a high-profile finale to a comic quest that Degeneres cooked up months ago on her daytime talk show. Both of these media stars are known for their generosity, and it’s likely this publishing coup will result in even more prizes and money for an American public that could definitely use some cheering up.

But now it’s time for Degeneres, who earlier succeeded in luring George Clooney onto her show, to take on a new challenge. One based on something she loves: Music. Every episode of The Ellen Degeneres Show kicks off with Degeneres dancing with audience members to tunes cranked out by her onstage DJ Tony Okungbowa, and later, there’s usually a live performance from a current recording artist. She often dances and sings with her guests. Degeneres is no kid anymore, but she still thrives on cutting edge, energetic music. Generally, she leans toward rap and hip-hop, judging from her show, as well as her brand new online music page.

Maybe Degeneres could also give some props to garage rock and power pop. Like hip-hop, these often overlooked sub-genres of rock and roll provide a powerful incentive to move your feet and groove to the beat, and exude a certain underground mystique. Garage rock and power pop songs rarely make the charts, but bands like The Chesterfield Kings, Cheap Trick, and Fountains Of Wayne could open an exciting new world to Ellen viewers.

Just as Degeneres teamed up with Winfrey, she could join forces with Little Steven Van Zandt, who hosts the syndicated Underground Garage radio show. He could share his garage rock and power pop expertise with her, while her media savvy could result in a much wider audience for the bands he so valiantly champions. Imagine The Len Price 3 or The Urges rocking the house on The Ellen Degeneres Show. Of course, Tony could stay, but hopefully he’d mix in an occasional “Gloria” by The Shadows Of Knight or “Blood & Roses” by The Smithereens.

Van Zandt is aiming to launch an ambitious interactive website called Fuzztopia early next year that would enable bands to promote their music by posting profiles, videos, and songs. Degeneres is genuinely passionate about helping people and fostering creativity, so this would be right up her alley. And wouldn’t be great to see her and Van Zandt sharing the cover on magazines like Rolling Stone, Q, and Mojo?