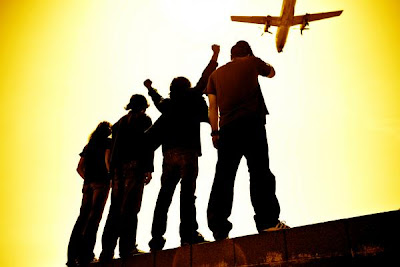 This is a review I did for the Illinois Entertainer a while back.

Simultaneously releasing a pair of EPs rather than making its debut on a single disc might seem like a marketing ploy on the part of Kingsize, but there’s a certain logic to the L.A. band’s approach. The Good Fight offers scrappy garage rock songs while The Bad Night is a heavier, hard rock affair. Reportedly, Kingsize wants to let these genres duke it out before deciding which one to pursue on its next release.

Both CDs offer powerful music anchored by vocalist/drummer Jason Thomas Gordon and guitarist/vocalist Cary Beare. Gordon, grandson of comic actor Danny Thomas is an impressive vocalist who writes streetwise but well-crafted lyrics on songs like the catchy “Miss America” and grunge rock-oriented “Nice Dress Pt. II.” He adds a touch of glam to the hard-rocking stomp of “Rabbits” but also manages to sell the inner city romance of “Elevator.” The swaggering, guitar-driven “Hits For Hypocrites” feels like timeless rock ‘n’ roll no matter what label Kingsize decides to slap on it.