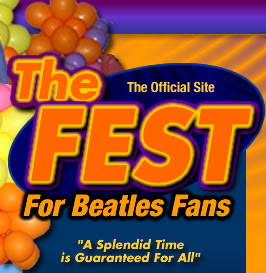 The 25th Annual Holiday Sale catalog from The Fest For Beatles Fans was just dropped off at my house by Mr. Postman. It’s a colorful 40-page booklet jammed with dozens of unique gift ideas for avid fans of The Fab Four. Much of the merchandise will be familiar to anyone who has cruised the massive marketplace at The Fest For Beatles Fans, the annual convention run by Mark and Carol Lapidos. Unlike the actual Fest, the catalog doesn’t offer memorabilia from other 1960s bands, rare records, or high-priced art and photography.

What you will find is all kinds of Beatles-related apparel, from baseball style caps and knit hats to Swedish imported socks and pink or black shoelaces. You can wipe your runny nose with a handkerchief, dream sweet dreams in pajamas, or flaunt your physique in boxer underwear, all the while proclaiming your love for John, Paul, George, and Ringo. There are four pages of t shirts; some very colorful and imaginative, and others with just song titles printed on them. I could go on about belts, aprons, hoodies, and patches, but you get the picture.

The Fest For Beatles Fans catalog also has home decorating options, including blankets, lamps, rugs, and a Yellow Submarine shower curtain. A Limited Edition 9” autographed Ringo Starr figurine, priced at $395, looks to be the most expensive item. You can get a 7” talking John Lennon figure for $20, or spend $33 on a Revolver alarm clock. Toast the holiday season with a Let It Be shot glass or a Sgt. Pepper glass beer mug, and serve snacks on a collectors plate graced with John Lennon’s self-portrait.

Of course a single catalog can only offer so much, so here are a few websites to help recreate the ambience of the actual Fest and provide more gift ideas for Beatles fans. Beatlesuits.com sells jackets and trousers reminiscent of the outfits the band wore at its performances. Rock Art Show sells art by Lennon, McCartney, and Starr, as well as animation pieces by Ron Campbell, who directed the Beatles cartoon series. The Shannon Gallery showcases some of the best Beatles portraits you’re likely to see. And every Sunday morning, Terri Hemmert, who has served as the Chicago Fest For Beatles Fans ringmaster for several years, can be heard on Breakfast With The Beatles on WXRT.